(WNS)–A new video released by extremist group Boko Haram on Aug. 14 purports to show up to 50 of the schoolgirls kidnapped from Chibok in 2014. Militants in the video say several girls died in the Nigerian military’s recent airstrikes and demand the government release detained fighters in exchange for the remaining girls.

In the video, one masked fighter issues a warning to the Nigerian government in the Hausa language as some 50 girls stand and sit behind him, some holding babies. 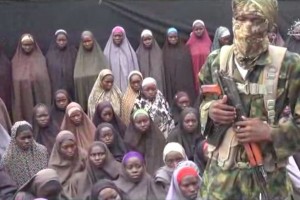 “Presently, some of the girls are crippled, some are terribly sick, and some of them, as I had said, died during bombardment by the Nigerian military,” the fighter said. “If our members in detention are not freed, let the government and parents of the Chibok girls know that they will never find these girls again.”

The video shows footage of the bodies of girls Boko Haram claims died from airstrikes. Nigeria’s air force has carried out increased raids and the army has freed thousands of captives, almost none from Chibok. But army spokesman Rabe Abubakar said the military is still working to confirm whether the victims died from the airstrikes and not from other causes.

One of the Chibok girls, identified as Dorcas Yakubu, implored the Nigerian government to heed Boko Haram’s request, backing the claim that several girls died in airstrikes.

“There is no kind of suffering we haven’t seen,” Yakubu said as some of the girls cried silently behind her. “Tell the government to give them their people, so we can come home to you. The suffering is too much.”

The mass abduction of the 270 schoolgirls from Chibok drew international attention to Boko Haram’s insurgency. Several of the girls escaped, but 218 remain missing. In May, an army-backed vigilante group found one of the girls, Amina Nkeki, wandering the Sambisa forest. The government came under renewed pressure after Nkeki’s rescue, as it rekindled hope some of the girls were still alive.

Samuel Yaga, one of the Chibok parents, saw his daughter, Serah, sitting in the background of the video.

“It’s like being beaten and being stopped from crying,” he told the BBC Hausa Service. “It’s a real heartache. We want them back irrespective of their condition.”

Information Minister Lai Mohamed said the government is responding cautiously to the situation.

“We are being extremely careful because the situation has been compounded by the split in the leadership of Boko Haram,” Mohamed said. “We are also being guided by the need to ensure the safety of the girls.”

The army on Sunday declared three Nigerians are wanted for possible connections to the video. Nigerian journalist Ahmed Salkida, who has access to Boko Haram, said on Twitter he received the video exclusively from the fighters before they posted it publicly. Aisha Wakil, a lawyer, helped negotiate with the Nigerian government on behalf of Boko Haram during the 2013 amnesty talks. And Ahmed Bolori, who lives in Maiduguri, serves as coordinator of Fa’ash Foundation and the Partnership Against Violent Extremism.

“The group’s fissure presents a unique opening, but Nigeria instead has threatened the arrest of a journalist, lawyer, and peacemaker in what appears a crackdown for the release of the video,” Ogebe said in a statement. “Buhari should seize the moment to negotiate the singular ransom demand of deposed leader Abu Shekau, who clearly has some girls, to swap them for imprisoned terrorists.”