“Beloved, I wish above all things that thou mayest prosper and be in health even as thy soul prospereth.” – 3 John 2

Wouldn’t it be a blessing to know that your primary care physician is a Christian who practices with Jesus’ Hand on his or her shoulder? Wouldn’t you appreciate knowing that the clinicians, researchers, and educators on whom your healthcare depends have trained themselves in Christ’s name, their identity rooted in Him?

Meet Boston Healthcare Fellowship (BHF), an offshoot of Longwood Christian Community (LCC). These two organizations serve the healthcare community in Boston in the name of Jesus for the glory of God. They provide Christian fellowship, education, and mentorship to those working in Boston’s diverse healthcare occupations including clinical medicine, public health, nursing, research, dentistry, and physical therapy. BHF’s vision is “to reunite faith and healthcare in line with God’s intention of bringing holistic healing to the whole world.”

Healthcare today is so much about making money, how many patients a doctor sees, prestige, getting into debt from going to Medical School, and burnout due to stressful and demanding schedules. What is sorely needed is an opportunity for healthcare professionals to tap into a source for encouragement and assistance in becoming equipped for a holy calling. In short, a chance to consider what God may want for themselves and their patients, to offer hope beyond what circumstances might suggest. 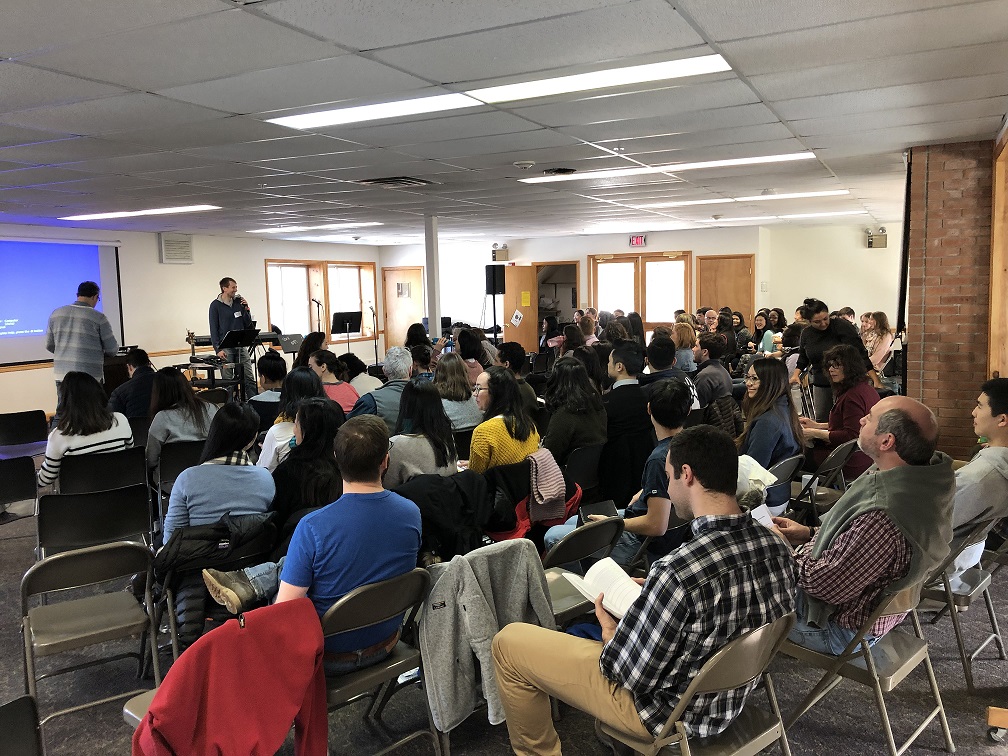 Andrew Fasset speaking to the morning session during their recent retreat at Toah Nipi Retreat Center in Rindge, NH.

The BHF website states, “As brothers and sisters within biomedical research and health care, we desire to follow Jesus as we seek to alleviate human suffering and promote health in His name. We are working together as students, clinicians, researchers and educators to serve faithfully in the university, community and global mission fields.” Many opportunities for Christian service are listed on BHF’s website (www.healthcarefellowship.org). Among them are global and local organizations and churches sending out short-term missions, international medical missions and service organizations, and local service opportunities.

Before Boston Healthcare Fellowship came into being, Longwood Christian Community was founded in 2000 to fill a need for Christians in medical training: a place to live together in an intentional Christian community. The first house was purchased in 2003, and the sixth and final house, to date, in 2014. The vision of LCC is to provide housing for students, clinicians, scientists, and those in health-related professions to enable them, their spouses, and children to live together for the purpose of:

* Growing spiritually, encouraging and praying for one another

* Receiving from and offering mentorship to believers across such boundaries as age, race, marital status, and career stage

* Demonstrating hospitality to others

* Sharing the redeeming love of Jesus with those around them

Longwood Christian Community is headed by three families who are the trustees, in addition to others. One family owns one house, another owns two houses, and the third owns three houses. Residents pay rents to these families. LCC was incorporated as a church for tax purposes, organized under 501 C3; one of the families takes care of the administration. While it doesn’t operate as a traditional church, it does feature house dinners, a retreat, and weekly men’s and women’s Bible Study and prayer on Tuesday mornings or Wednesday afternoons.

Support for LCC comes from grants and individual donors, as well as from Park Street Church in Boston, for medical work. The head families attend Park Street Church; there is a close connection between the church and Boston Healthcare Fellowship. Michael Balboni is on staff at Park Street Church as an interim minister who handles counseling, pastoral care, and the Sunday evening service. He and his wife, Tracy, a radiation oncologist, own three of the LCC houses.

As time passed, members of LCC began catching the vision of something beyond simply living with like-minded people in an intentional Christian community. They wanted to support the faith of those outside the community, as well. To that end, they organized Boston Healthcare Fellowship. A part-time position was established, that of Boston Healthcare Fellowship Director, previously an informal role undertaken by a member of LCC. Several Directors have held the position since 2010. 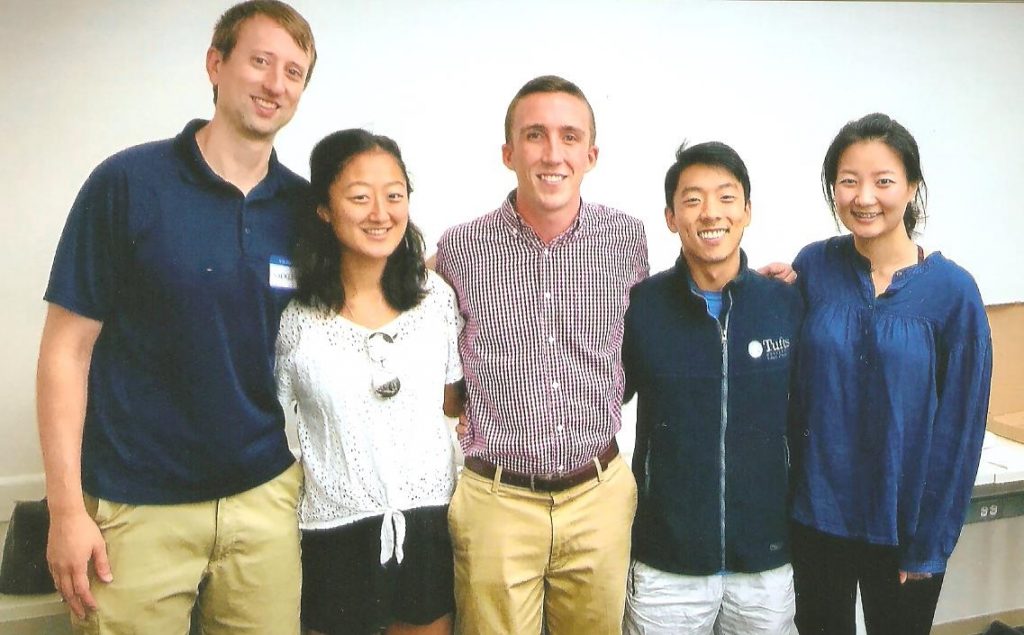 Last June Andrew Fassett, age 32, was called to be the Director of BHF, its only employee. An Associate Director for the Christian Medical and Dental Association, Andrew is currently working full-time on his MDiv at Gordon Conwell Seminary where he met Kelly, who is getting her MDiv at Boston University and heads up Unite Boston, a non-profit. After their marriage last May, Andrew and Kelly rented a furnished room in one of the six houses owned by LCC, paying $1200/month plus a flat fee for utilities. Also living in the house, located across the street from Harvard Medical School, are six others who share a kitchen having two refrigerators, and eat together on Sunday evenings. All are on different schedules. Every other month, the residents of all six houses get together for dessert or a meal and have the opportunity to participate in retreats.

While Longwood Christian Community attracts like-minded residents, Boston Healthcare Fellowship’s purpose is to draw in others by means of parties and monthly dinners catered by Harvard Medical School. Generally, a speaker is invited to these dinners and, after a meet-and-greet, discussions follow on various topics of interest including case studies and testimonies. Andrew’s job includes organizing such BHF events to appeal to nurses, researchers, various doctors, pharmacy students, students studying health policy, med school, and dental students. Most are young but there are a few older people, too. Students at Tufts, Boston University, and Harvard University’s medical and dental groups may participate in the Christian Medical and Dental Association (CMDA) on their campuses (presently there are three active groups).

Networking in Boston’s Christian healthcare community works well for a number of related organizations. Although Boston Healthcare Fellowship has an evangelical flavor, it beckons a broader

community including Coptic, Catholics, and Christians across the spectrum. It is grace and faith-focused in impact. Such an environment creates a non-threatening space for bringing up and discussing hard questions. Fassett sometimes finds himself meeting personally either with individuals or in small groups. These discussions can spearhead the discerning of spiritual gifts that are worth more than careers.

Growing up in a Christian family while living in Princetown, NY, Fassett attended the same church until college, being involved from nursery through youth group. He remembers at a young age praying a prayer of belief in Jesus while on the front lawn of the church. He went on to co-lead a small group in high school and actively tried to live out his faith in his life and at public school. But during his freshman year of college at Rensselaer Polytechnic Institute (RPI) in Troy, he did not attend church or any other fellowship. Instead he got caught up in school responsibilities, ROTC, and social events. In his sophomore year he began attending church and getting involved in the Intervarsity group on campus.

During the second half of sophomore year, and especially over the summer, he was struck anew with the truth and power of the gospel message. He and a friend had been going through an evangelism curriculum which, Fassett says, ended up having the biggest impact on them! Fassett says he was convicted of his utter sinfulness and convinced that only Jesus could provide a means for the forgiveness of his sins. He recommitted himself to Jesus. From that point on, his faith was taken to a new level. Soon afterwards he felt God’s call to be a pastor, which call he is very close to answering these many years later.

In the meantime, he has earned a degree in mechanical engineering at RPI where he participated in ROTC for four years. Next, he served 7 years in the Marine Corps with training in VA, and NC. After being stationed in Okinawa, Japan, and assigned to a 7month tour in Afghanistan, he returned to Virginia to be an instructor at Quantico for 3 ½ years. He left active duty to attend Gordon-Conwell and will graduate in May. He and Kelly hope to remain in the Boston area. 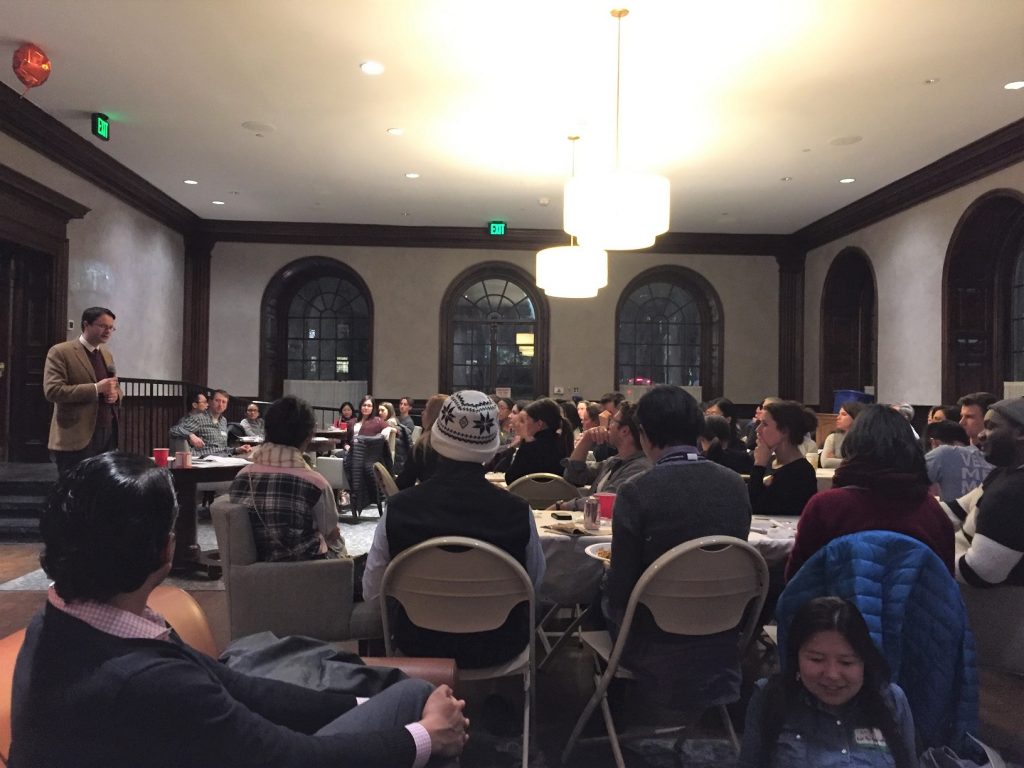 Fassett believes that Christianity is still very relevant in these times; BHF offers people a chance to see a holistic view – how their faith can be instrumental in the healthcare field as they seek to bring physical and spiritual healing to the world. A healthcare career and religion do not need to be separate. Some say yes, that religion and medicine should mix, and some say no. But research is showing that regular attendance at religious services leads to improved health outcomes. Surveys and studies can be useful in helping to challenge preconceived notions of “cultural defeaters” (Tim Keller’s term) when merely claiming “the Bible says so” won’t cut it.

BHF endeavors to speak to people in ways they’re open to hearing. Rather than employing mass marketing, it works through Face Book events, websites, and friends inviting non-Christian students to BHF events featuring specific speakers or topics specifically of interest to them. It functions as a type of friendship Christian evangelism in Boston’s healthcare community.

“Trust in the Lord with all thine heart; and lean not unto thine own understanding. In all thy ways acknowledge him, and he shall direct thy paths. Be not wise in thine own eyes: fear the Lord, and depart from evil. It shall be health to thy navel and marrow to thy bones.” Proverbs 3:5-8