For the past 28 years, as pastor of Water of Life Community Church, Dan Carroll watched the California legislature enact laws that negatively impacted his community. Although troubled, he never shared his concerns publicly with his congregation. Pastor Carroll’s passion was ministry, not politics. But this year his attitude changed with the introduction of AB 2943, a bill that undermines the ability of the church to share the Gospel with those struggling with same sex attractions or gender confusion.

Several months ago, Pastor Carroll took the plunge and told his Fontana, California, church of 7500 about AB 2943. To his surprise, that decision led to a one-on-one meeting at the state capitol with the chair of the California Legislative LGBT Caucus and AB 2943 author, Assemblyman Evan Low. Not only did the two have a thoughtful discussion about the bill, but Low agreed to delay final votes on the bill until after the July recess. Yesterday, Pastor Carroll released details of his venture into politics in a letter he wrote to California pastors, explaining his decision and encouraging them to follow his lead. 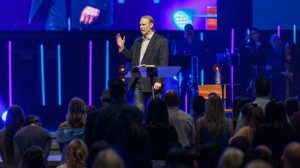 “Water of Life seeks to bring hope, healing, and transformation to individuals through the power of the Gospel, including those who struggle with same sex attraction and gender confusion,” wrote Pastor Carroll. “This [bill] is a direct threat to the religious freedom of Christian counselors, ministries, and churches. And it is also a direct threat to the freedom of individuals facing unwanted attractions or identity confusion to find help from a licensed counselor or support group. I could not sit silently by and watch this bill pass.”

The letter explains how Pastor Carroll asked his congregation to call their state representatives to express opposition to AB 2943. (see church website on the topic) He happened to be taking his church through a sermon series on the life of Daniel at the time. “Rarely have we been outspoken in the political arena,” Pastor Carroll told his congregation. “But there comes a time when we must take a stand, just as Daniel did when confronted by King Nebuchadnezzar.”

Soon after making his plea to his congregation, he got a call from his member of the State Assembly, Eloise Reyes. Her call was prompted by 3000 people from his church that contacted her office. Reyes expressed concern that so many people in his church were upset with her.

“After an hour plus conversation in Assemblywoman Reyes’ office, I was invited by her to go to Sacramento to meet with Assemblyman Evan Low, the author of AB 2943, to discuss our strong concerns with the bill,” Pastor Carroll wrote. “The whole experience has been way out of my comfort zone, but it has shown me that if we get involved, and walk this out thoughtfully and kindly, we can make a huge difference in our state and help stop legislation that undermines our ability to share the Gospel.”

Pastor Carroll ended his public letter pleading with pastors to end their silence.

“I am writing this letter to encourage you to get involved, while we still have a voice in the State of California,” Carroll pleads. “Obviously, I believe I have made a mistake by not speaking up sooner. My church, like yours, has a voice in our community and your state representatives need to hear from you and your congregation. The time to sit by and hope someone else is going to speak up is over.”