California GOP Candidate “This is not Bangladesh” 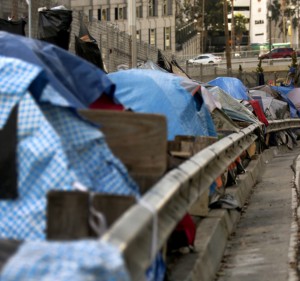 Los Angeles has always had its seedy parts, home to outlaw bikers and unconventional, eccentric individuals — which actually lent a certain charm, to this city of sun, sea, and sand. However, what has transpired within the last few years to this once beautiful paradise is a national disgrace.

John Cox, the Republican gubernatorial candidate, took a walking tour recently through LA’s skid row, and likened what he saw to a “third-world country.” Adding, “It is absolutely not compassionate to let people live on this street,” Cox told reporters. “This is 21st century California.”

The Rancho Santa Fe businessman walked along the debris-strewn streets with a group of Los Angeles police officers. “Wow, look at this,” he said as he walked down the middle of the street, gazing at rows of tents. “It extends for blocks.”

Cox, a businessman turned politician surveyed the filth and squalor where more than 4,200 homeless reside, and acknowledged “This is not Bangladesh,” as he made his way through downtown LA where more then half (roughly 2,100) homeless live unsheltered and on drugs.

The Democrat turned Republican and former businessman has experience in solving housing issues. In his “other life” the multimillionaire actually mirrors President Trump as a builder of apartment houses in the Midwest and is undoubtedly more qualified in solving the current housing crisis in California than his rival.

His Democratic opponent Lt. Gov. Gavin Newsom was also the mayor of San Francisco between 2004 and 2011 before he became Gov. Moonbeams clone. In a radio debate aired on October 8th, Cox took Newsom to the woodshed stating, “Gavin was mayor (of San Francisco) for eight years. He didn’t solve the homeless problem here at all. And it’s gotten worse.”

Moreover, according to the U.S. Department of Housing and Urban Development, the housing crisis among the homeless population in California has gotten progressively worse. In 2017 the number of unsheltered individuals stood at more than 134,000, today those numbers have seen a 14% increase from just last year, which should give even the most loyal progressive pause in how Governor Brown is handling the growing crisis.

However, LA may have a more immediate unfolding crisis on their hands, as multiple cases of “flea-borne” typhus in downtown LA, has just been reported by health officials. The flea-spread disease can cause organ damage in severe cases. Thus far 9-individuals have come down with the illness between July and September, with health officials eyeing trash and stray animals as potential catalysts.

The disease is caused by bacteria found in infected fleas that can come from cats, rats, opossums, and other stray animals. Accumulation of trash or overcrowding and poor hygiene is typically associated with the spread of the disease.

Although death is extremely rare because of our awareness of what causes the disease, it’s, however, noteworthy to point out, if left untreated the potential for a widening epidemic of the disease is not out of the realm of possibilities.

It’s also worth referencing a little history. During Napoleon’s retreat from Moscow in 1812, more French soldiers died of typhus than were killed by the Russians.

While the disease cannot be transmitted human-to-human, there are no vaccines available on the market today to combat the illness. Individuals should avoid areas where rodents are found.

The issues plaguing LA and the entire state of California could be fixed with adequate governance, unfortunately, these days its in short supply.