Can We Eliminate 90% of Allergies — TOMORROW?

I’d never stand in the way of an honest man earning a living. And there’s plenty that Uncle Sam will let you sell to anyone who can scrape together the cash.

He’ll let you sell machine guns… hypodermic needles without a prescription… and, lately, even marijuana. But try selling a quart of raw milk, and you’d better start brushing up on your karate and gang signs. Because his goons will have you tossed in the slammer faster than a sneeze through a screen door!

But a new study out of Sweden could be the latest proof that our government’s war on raw milk isn’t just as outdated as bell-bottomed pants. It’s a public health TRAGEDY that could be sentencing a kid you love to a lifetime of misery.

Researchers from Sweden’s University of Gothenburg just spent years researching Swedish kids with the good fortune to grow up on dairy farms.  It turns out these kids wouldn’t know what to do with an inhaler if they saw one. In fact, they practically developed immune system super powers that would have had Spiderman drooling through his mask!

These farm kids had only ONE-TENTH the risk of developing serious childhood allergies as tots growing up in cities, and their immune systems were stronger.

Researchers say they need to study the phenomenon further — but let me save these folks millions in lab costs and years of time. These kids didn’t become allergy-killing ninjas singing Swedish folk songs around Uncle Sven’s bonfire. I’d bet my hat they’re conquering allergies the old-fashioned way — one healthy glass of raw milk at a time!

Swedish farm kids… and lots of American farm kids, too… grow up drinking milk the only way you should — fresh, and right from the cow’s udder. Lots of Swedes even drink traditional products made from raw milk, like filbunke (I’m guessing that tastes better than it sounds). 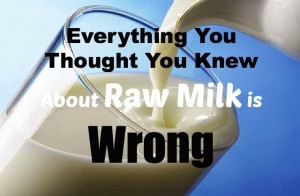 And the allergy-fighting benefits of raw milk have been proven time and again. A study of American Amish farm kids — who are practically nursed on raw milk — found they were 84% less likely to suffer from allergies.

It’s all because raw milk is loaded with healthy bacteria and enzymes proven to wipe away allergies and even CURE digestive disorders.

Europe is getting the message. Countries across the continent are installing raw milk vending machines so kids — and adults — can get their hands on the stuff without trucking to their nearest farm.

And Uncle Sam could do the same thing. Our government may be able to slash America’s allergy rate and get MILLIONS of wheezing, coughing kids off the sidelines… starting tomorrow. All he needs to do is get out of Big Dairy’s pocket and stop the senseless war on raw milk.

Because we’re learning yet again that by denying your right to raw milk, our feds aren’t protecting your health.

They’re giving you a raw deal.