The move, announced on International Women’s Day, follows on the heels of the country’s pledge of $20 million to support international abortion as part of the European “She Decides” fundraiser. Mostly Nordic nations raised $180 million in pledges last week to make up for the loss of U.S. funding for international abortion-providing organizations after President Donald Trump reinstated the Mexico City Policy. 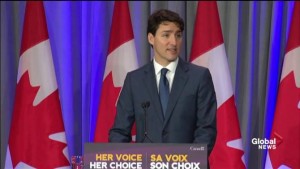 Pro-life leaders in Canada have decried the new funding as a misallocation of the nation’s resources.

“We are horrified by our government’s decision to spend more than half a billion dollars on spreading abortion across the world,” said Johanne Brownrigg, a spokeswoman for Campaign Life Coalition. “Our nation, under Trudeau, has now become one of the world’s top exporters of abortion and sterilization. I guess Trudeau’s admiration for China’s dictatorship and horrific family planning programs are now shaping Canada’s foreign policy.”

Many of the women in developing countries don’t appreciate the focus on abortion rather than maternal healthcare, said Gwen Landolt, vice president of REAL Women of Canada, a pro-family organization. She called the grant a “colossal waste of taxpayers’ money” that will “do little to change the lives of women in developing countries.” Those women, she said, “regard their children as their wealth, not a deficit, and unlike many women in the Western world, welcome motherhood,” citing research that found only 8 percent of women in Africa, when asked why they do not use contraceptives, attributed it to lack of access.

The Society of Obstetricians and Gynecologists of Canada found that 80 percent of maternal deaths in low-resource countries are caused by complications during labor and birth. Instead of abortion and contraception, Landolt said, Canadian aid money should go toward maternal and child health initiatives.

“I think there is frustration caused by the election of Donald Trump as U.S.  president, and some governments are looking for highly symbolic ways to show their displeasure,” said Meaney, noting  European countries’ facing budget cuts and international donor fatigue will likely take a toll on funding. “Even where there is strong ideological support for abortion-promoting groups, it will be next to impossible to sustain higher funding levels for them over the next few years.”