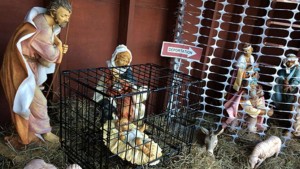 A Massachusetts Catholic church that made headlines over its nativity scene last Christmas is attracting attention again this holiday season.

The Catholic Church globally is one of the world’s leading proponents of illegal immigration. Pope Francis himself has said many times that all nations should open their borders and let anyone and everyone come in. He says that is how a Christian is supposed to show compassion. What Francis forgot to tell you, of course, was how lucrative the illegal migrant business is, and how much money they are making in government grants by promoting and perpetuating it.

“Therefore hell hath enlarged herself, and opened her mouth without measure: and their glory, and their multitude, and their pomp, and he that rejoiceth, shall descend into it.” Isaiah 5:14 (KJV)

So a Catholic Church in Massachusetts decided to promote the illegal migrant caravan this year in a novel way. They took their nativity scene and placed the baby Jesus in a prison cage, next to a sign marked with ‘Deportation’. They are simply following Pope Francis’ mandate of open borders for all, which in reality is a satanically-inspired theme of how to overthrow sovereign nations. Germany allowed a million unchecked migrants in, and it almost destroyed their country. Sweden allowed unchecked migrants in, and now their women are raped on a daily basis.

Let me just close with this thought. Heaven not only has a strict immigration policy, it also has a gate and a massive wall. Hell on the other hand is wide open to everyone and is enlarging itself daily. Walls and borders are not only good, they are necessary if you want to have peace, security and order. But that is not what Pope Francis wants, he wants anarchy. And speaking of walls, how about taking down the massive wall that surrounds the Vatican? Hello?….anyone??

FROM CBS BOSTON: The nativity scene at St. Susanna Parish is hoping to shine a light on the topic of immigration. The scene was set up over the weekend. It shows baby Jesus inside a black cage and the three wise men separated by a fence with a sign that reads “deportation”

The unusual holiday display was created in hopes of sparking conversations about how immigrants are being treated at the United States-Mexico border, including the separation of children from their parents.

Last year, the same church tackled the issue of gun control with its nativity scene. Right above Mary, Joseph, and baby Jesus were the locations of the worst mass shootings along with the death count at each attack.

Church leaders told the Boston Globe they have received mixed reactions for their displays. It was created by the church’s Pax Christi committee, which says their goal is to educate the community on issues of peace and justice.