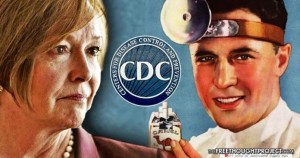 A scathing report has just revealed that the now-former head of the Center for Disease Control, Brenda Fitzgerald was purchasing shares in drug companies as well as big tobacco—while heading up the organization ostensibly devoted to health. The hypocritical nature of her position at the CDC while simultaneously investing in companies contrary to her mission exposes the true control industries have over allegedly ‘objective’ government agencies.

For those that don’t know, the CDC is supposed to be the nation’s leader in smoking cessation efforts as smoking-related deaths kill more people in the United States every year than anything else. So, when the head of the nation’s largest anti-smoking department not only holds a massive amount of stock in Big Tobacco, but actually buys more of it while she is in office, it is time to pay attention.

What’s more, the CDC is currently fighting a massive opioid epidemic in America right now—one that is now killing more Americans every year than died in the Vietnam war. So, when the head of an agency is tasked with preventing more deaths from dealy prescription opioids—is buying stock in the very companies behind the crisis—it is also time to pay attention.

“You don’t buy tobacco stocks when you are the head of the CDC. It’s ridiculous; it gives a terrible appearance,” said Richard Painter, who served as George W. Bush’s chief ethics lawyer from 2005 to 2007. He described the move as “tone deaf,” given the CDC’s role in leading anti-smoking efforts, according to Politico.

After assuming her position, she then moved to purchase even more Big Tobacco shares in Japan Tobacco, one of the largest tobacco companies in the world who sells multiple brands in the United States.

As Politico points out, buying shares of tobacco companies raises even more flags than Fitzgerald’s trading in drug and food companies because it stands in such stark contrast to the CDC’s mission to persuade smokers to quit and keep children from becoming addicted. Critics say her trading behavior broke with ethical norms for public health officials and was, at best, sloppy. At worst, they say, it was legally problematic if she didn’t recuse herself from government activities that could have affected her investments.

On top of investing in companies—who can be defined as the enemy of her job—Fitzgerald, after her appointment began investing in major drug companies as well. As we know, the CDC is responsible for creating and enforcing the vaccine schedule for all Americans. So, when the head of the CDC begins to grow a financial relationship with the very companies who make billions off these vaccines, a major ethical line is then crossed.

Fitzgerald also bought thousands of dollars of shares in several health-care companies, including Merck & Co, Bayer, and Humana, which the U.S. Department of Health and Human Services deemed a conflict of interest, Politico reported.

“Like all presidential personnel, Dr. Fitzgerald’s financial holdings were reviewed by the HHS Ethics Office, and she was instructed to divest of certain holdings that may pose a conflict of interest. During the divestiture process, her financial account manager purchased some potentially conflicting stock holdings. These additional purchases did not change the scope of Dr. Fitzgerald’s recusal obligations, and Dr. Fitzgerald has since also divested of these newly acquired potentially conflicting publicly traded stock holdings,” an HHS spokesperson told Politico.

It is no secret that it is a revolving door for those in the industry. In fact, Dr. Julie Gerberding, the former director of the Centers for Disease Control and Prevention, was named as president of Merck & Co Inc’s vaccine division immediately following her 7-year stay in the government.

When industry insiders move back and forth between companies that profit from government laws and the government, there is no such thing as objectivity or democracy. Americans are told that the appointees’ ties to special interests give them “professional experience” which makes them qualified for the job. However, what it really does is foster corporatism and corruption at the expense of American citizens.

While Fitzgerald resigned yesterday over the massive scandal, as long as Americans continue to look the other way while they are fleeced by those in power, it is only a matter of time before another industry insider rises up the corporatocracy ladder and fills the void.