Chinese Christians each week assemble at evangelical church services held in Soviet-era office buildings in the country’s capital, often singing and praising “Yesu” (“Jesus” in Mandarin). Some attend the government-sanctioned Yizhuang church, hearing pastors say the lives they lead can be difficult, but with the guidance of Yesu, they have the tools to carry on. However, not all Chinese officials agree that Christianity should be the tool on which to rely.

In August 2014, a top-ranking official in the Chinese government informed the world that China was planning on nationalizing Christianity, reports Religion News Service. Wang Zuoan, director of the State Administration for Religious Affairs, said the “construction of Chinese Christian theology should adapt to China’s condition and integrate with Chinese culture.”

Zuoan’s announcement triggered noticeable concern among Christian groups in China, as well as those in other countries. 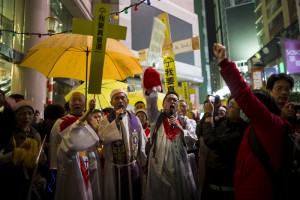 Pro-democracy protesters from a politically active Christian church, hold up yellow umbrellas, a symbol of the Occupy Central civil disobedience movement, as they sing Christmas carols at Times Square in Hong Kong early on December 25, 2014. Photo courtesy of REUTERS/Tyrone Siu
*Editors: This photo may only be republished with RNS-CHINA-CHRISTIANS, originally transmitted on March 8, 2016.

A pastor from Zhejiang province in eastern China said the intent of sinicizing Christianity is “to reform and remold Christianity into a (Communist) Party-dominated tool that can be used in its service,” according to Religion News Service.

China Aid, a Christian human rights organization based in Midland, Texas, released a report stating that sinicization is nothing less than an attempt to “de-Christianize the church in China.”

A budding friction between the state and Chinese Christians is surfacing, reports Religion News Service. Over the past two years, Chinese authorities, who cited building code violations, tore down more than 1,200 crosses from churches across the country, destroyed several churches and rounded up Christian activists.

Chinese Christians in Zhejiang either rebuilt or replaced some of those crosses, and other worshippers hung small crosses outside the windows of their homes or from car mirrors.

Missionaries introduced Christianity to China as early as the 7th century, drawn by the hundreds of millions of potential converts. However, the People’s Republic of China in 1949 executed religious repression throughout the country. From 1966 to 1979, during the so-called Cultural Revolution, Communists shut down all churches, mosques and temples.

But in 1979, when Mao Zedong’s successor, Deng Xiaoping, steered the Chinese economy away from socialism and toward the free market, he also ushered in other freedoms and people were granted some religious autonomy.

This growth of Christianity is a source of alarm for Chinese authorities, according to Fenggang Yang, a professor of sociology at Purdue University, and one of the world’s foremost experts on religion in China. Yang projects that if “modest” growth rates are sustained, China could have as many as 160 million Christians by 2025 and 247 million by 2032.

The Chinese authorities “are afraid of losing control,” Yang told Religion News Service. “Many Christians do show a level of independence from government interference. This worries officials. They want to find some way to maintain control, and sinicization is the latest effort to tame Christianity through a more systematic campaign.”

Yang notes the push to sinicize Christianity manifests as church buildings being constructed in a traditional Chinese style, the music in church services sounding more Chinese and preachers using Chinese stories in their sermons.

But he believes the most important aspect of the current campaign is to make sure Christian churches are politically aligned with the current government, and are not spreading subversive ideas from outside China’s borders. “I think it’s ridiculous to still regard Christianity as a foreign religion,” he said. “For those Christians, they don’t see a foreign religion, but a Christian God they perceive to be real, powerful and that’s helped in their lives.”

Xi Lian, professor of World Christianity at Duke University, suggests the tension between Chinese Christians and the Chinese government rose due to the hostility of the state toward all forms of religion that do not subject themselves to government control and domination.

But he thinks Christianity’s membership and influence will only expand. “The harsher the state’s treatment of Christianity, the more vigorously and unpredictably it will grow,” he said.

Many Chinese say they, too, believe Christianity will continue to grow in China “because the appetite is there and Communism lets too many people down.” 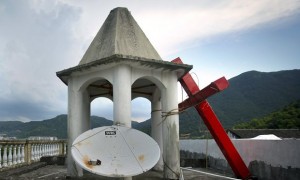 A cut-down cross on a church roof in Zhejiang province, China