Christian teen beaten to death by Muslim classmates in Pakistan

(WNS)–Sharoon Masih, a Christian student in Pakistan, died Aug. 27 after his Muslim classmates beat him to death at a school in Burewala, Punjab, according to Pakistan’s The Nation newspaper. Witnesses gave conflicting accounts about what led to the attack, but some, including The Independent in London, reported the 17-year-old drank from a Muslim’s water cup. Police have arrested only one student, Muhammad Ahmed Rana.

Masih’s relatives and the British Pakistani Christian Association told The Nation he was killed because of his religion. His parents used their savings to send Masih to MC Model Boys Government School this year because he had done so well in school up to that point. But he immediately encountered hostility. 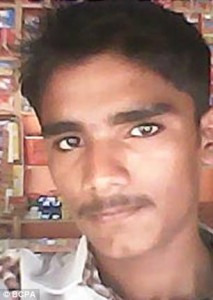 Following his first day, “Sharoon complained to his father that the teacher had slapped him for not wearing a uniform” and made him stand in the sun all day as punishment, his uncle said. He said people also called him “chura,” an insult that means “sweeper,” and referred to his low-caste background. Days later, school administrators and teachers failed to stop the fatal beating.

In addition to being forbidden to practice their faith in school and forced to learn Islamic teachings, Christian children in Pakistan often endure harsh treatment, according to International Christian Concern’s William Stark. He recounted incidents including teachers beating a Christian with a cricket bat, locking a small child in the bathroom all day for using one designated for Muslims, and forcing Christians to clean the school or a teacher’s home during the school day rather than taking classes.