FBI director says he doesn’t give a hoot about politics, sticks to recommendation not to prosecute Clinton

(WNS)–For more than four and a half hours July 7, lawmakers pressed FBI Director James Comey on his perplexing recommendation not to prosecute Hillary Clinton despite her mishandling of classified information as secretary of state. Unwavering in his judgment, Comey called Clinton’s actions careless and sloppy but short of criminal and claimed the FBI could not prove bad intent.\

“There are two things that matter in a criminal investigation of the subject: What did the person do? And when they did that thing, what were they thinking?” Comey told the House Oversight and Government Reform Committee. “When I look at the facts here, I see evidence of great carelessness, but I do not see evidence that is sufficient to establish Secretary Clinton or those with whom she was corresponding, both talked about classified information on email and knew when they did it they were doing something that was against the law.” 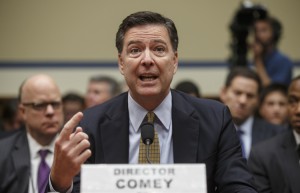 FBI Director James Comey testifies on Capitol Hill in Washington, Thursday, July 7, 2016, before the House Oversight Committee to explain his agency’s recommendation to not prosecute Hillary Clinton, now the Democratic presidential candidate, over her private email setup during her time as secretary of state, . (AP Photo/J. Scott Applewhite)

Comey tried to explain what he meant by saying no reasonable prosecutor would take a case against Clinton. He vowed it has nothing to do with the presumptive Democratic presidential nominee’s fame or political connections. Comey said Clinton’s actions were undeniably wrong, and probably should have consequences but insisted a criminal charge against her was not appropriate.

Tempers flared as Republicans tried to get the FBI director to say Clinton broke the law.

“What does it take for someone to misuse classified information and get in trouble for it?” Rep. Will Hurd, R-Texas, asked.

“It takes mishandling it and criminal intent,” Comey said.

“And so an unauthorized server in the basement is not mishandling?” Hurd retorted.

Hurd, along with his Republican colleagues, raised concerns that Comey set a dangerous precedent for top officials to be careless with sensitive information and face no consequences.

Through its investigation, the FBI verified Clinton used a private email server stored in the basement of her home in New York. Hundreds of emails sent and received on that server contained classified material and at least eight email chains contained top-secret information.

The server did not have round-the-clock security, and Comey said Clinton’s private system was less secure than a free Gmail account.

Comey said the FBI could find no evidence anyone hacked into her emails but admitted no one can prove it never happened.

Democrats lauded Comey for his integrity during the investigation and thanked him for not swaying to partisan interests.

“I firmly believe your decision was not based on convenience but on conviction,” Rep. Elijah Cummings, D-Md., told Comey.

Rep. Ted Lieu, D-Calif., noted no one on the committee can be objective in this case: “I can’t be objective, I have endorsed Hillary Clinton for president.”

The FBI director agreed and told the committee his agency “does not give a hoot” about Republicans or Democrats. Agents conducted the Clinton investigation without political motivation, he said.

Comey remained resolute during the long hours of questioning—even refraining from using the restroom. But questions of the timing of his press conference on July 5 and possible collusion with Clinton supporters touched a nerve: “Look me in the eye and listen to what I’m about to say, I did not coordinate with anyone. The White House, the Department of Justice, nobody outside of the FBI had any idea what I was about to say. I say that under oath and I stand by that.”

Committee Chairman Rep. Jason Chaffetz, R-Utah., told reporters after the hearing he’s equally unnerved: “I still can’t believe there are no consequences for what she did.”

Chaffetz pressed Comey about who had access to Clinton’s private server, drawing from Comey’s earlier statement that Clinton’s lawyers reviewed her emails. Chaffetz said it’s one thing to store a private server with classified information, but it’s another to allow people without security clearance to browse through it.

“Did Hillary Clinton give non-cleared people access to classified information?” he asked.

Chaffetz vowed a follow-up to the investigation, even though the Department of Justice officially closed the case Tuesday evening.

In the flurry of bringing Comey in to testify, less than 48 hours after his press conference, Chaffetz has not talked to House Speaker Rep. Paul Ryan, R-Wis., about the next steps to explore possible consequences for Clinton.

But early this morning, Ryan took action on his own. He wrote a letter to Director of National Intelligence James Clapper, requesting he revoke Clinton’s security clearance.