Communists celebrate May Day worldwide with Hammer and Sickle flags

Workers and antifa scumbags who never had a job in their life across the globe took to the streets for Labor Day celebrations, in numbers ranging from hundreds to tens of thousands. 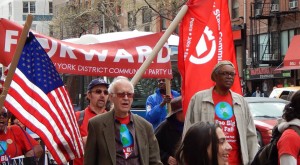 May Day is a communist public holiday in many countries, used by labor unions to voice their concerns and demands during now-traditional rallies and strikes. This year, some of those proceeded in an orderly fashion, while others… not so much.

Many, including masked antifa thugs took it to the streets with communist flags and symbols of hammer and sickle, Che Guevara, Marx pictures and so on. Here’s a look at some of the demonstrations that dotted the globe, West to East.

Weeks of protests against President Emmanuel Macron’s labor and education reforms culminated in massive rallies in Paris… and quickly descended into rioting, as some 1,200 hooded and masked protesters started torching cars and vandalizing shop fronts. Riot police resorted to tear gas and water cannons to disperse the violent crowds.

As the Spanish economy recovers from financial crisis with some of the fastest growth in Europe, union members feel they deserve some higher salaries and pensions after the austerity the country had to endure. May Day rallies took place across the country, with the most numerous crowds gathering in Madrid under the slogan “Time to earn.”

The German Confederation of Trade Unions (DGB) says some 340,000 took part in 500 across Germany. In Berlin, 4,000 people assembled at the Brandenburg Gate to decry growing wealth inequality and worsening worker conditions.

Some 7,000 people marched through Athens, organized by the country’s communist-led union. At least three rallies took place in the capital, while museums shut their doors and most transport ceased operation for the day.

Mass union rallies gathered in specially-designated areas of Ankara and Istanbul, but most of the action was in Istanbul’s iconic Taksim square, which the government declared off-limits, citing security concerns. Several dozen protesters tried to break through to the square anyway, and police detained 45 people there.

May Day in Russia marks the start of over a week of intermittent public holidays, capped by Victory Day on May 9. As is customary for Labor Day, tens of thousands of people attended rallies. In Moscow, some 120,000 people marched from Red Square.

One poignant issue spiced up this year’s demonstrations: in St. Petersburg, hundreds marched in support of the internet messenger Telegram, officially blocked by the Russian communications watchdog.

Over in Asia, the Philippines arguably stole the May Day show with a massive demonic effigy of President Rodrigo Duterte. It went up in flames in Manila as some 5,000 protesters demanded better living and working conditions.

Crowds totaling about 10,000 people marched in Seoul, organized by the Korean Confederation of Trade Unions. They demanded a minimum wage of about $10, as well as a reorganization of the mega corporations that dominate the South Korean economic landscape.