LOS ANGELES, CA. — The world premiere of “The Atheist Delusion,” which claims to “destroy atheism with one scientific question,” will be screened to a private audience while streaming live from within Ken Ham’s recently opened Ark Encounter, the massive life-sized Noah’s Ark in Northern Kentucky. 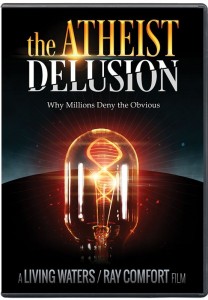 Ray Comfort, the movie’s producer, said, “From the start, we were concerned that people wouldn’t take seriously a movie that ‘destroys atheism with one scientific question.’ But it does exactly that by scientifically confirming the existence of God. Having a respected, scientifically based organization like Answers in Genesis being willing to premiere it is such an honor.”

Thousands have already viewed the movie within the first two days of its pre-release as a paid download, but on October 22, its official release date, it will be streamed live from the Ark.

Comfort said, “This film isn’t likely to convince the average proud and closed-minded atheist. But countless others, tempted to believe the ridiculous lie of atheism, are open-minded, and will be convinced by seeing the irrefutable proof for the existence of God.”

The best-selling author and filmmaker, whose movies have been viewed by millions, added, “We would love for millions more to watch ‘The Atheist Delusion,’ and invite Christians to host the live-streaming event from their church or home. The world premiere will be highly evangelistic, as well as thoroughly encouraging, equipping, and inspiring to seasoned believers.”

The private event, hosted by Ray Comfort and Ken Ham, will be streamed live on AtheistMovie.com on October 22 at 8 p.m. (ET). At the same time the movie will also be released on YouTube. To view the movie before its official release, see www.AtheistMovie.com for details.

To host a premiere go to www.atheistmovie.com/host-live-premiere