“Leave me your phone number,” she said. “I’ll think about it.”

The 2013 article by the Los Angeles Times outlined the story of Kevin Brown and his singular mission: to surprise women in hotels and help them quit prostitution.

Now, a new reality TV series by A&E with the working title 8 Minutes is bringing Brown’s work to the screen in a series of eight episodes featuring the cop-turned-pastor. He has eight minutes to surprise escorts in hotel rooms and offer them a way out. For twenty years on patrol, the Santa Ana police officer encountered his fair share of prostitutes, arresting them as a matter of course. But what he really wanted to do, he told his church congregation, was help them find rescue.

“He saw girls who had no place else to go, who had been abused by their pimps, girls who really needed a helping hand,” Tom Forman, executive producer of 8 Minutes, told Entertainment Weekly. “Now that he’s running a church, he can offer them that help. That’s what he was doing well before we called him. I like a little reality in my reality shows.”

After retiring, Brown dedicated himself to serving his church full-time, and his undercover prostitution intervention operation was born. Forman says inspiration for the A&E show sprang from reading the 2013 Times article about Brown and his team of Christian volunteers, called Safe Passage OC, who endeavored to liberate women and minors from the sex trade through unofficial stings.

So how does he do it? 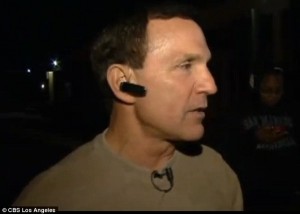 Brown’s perception is finely tuned after two decades on the job, explained Forman, enabling him to “decode an ad or solicitation or posting on the Internet like no one you’ve ever seen.” He studies photos of potential victims on backpage.com or craigslist, hunting for clues such as makeup covering bruises or minors whose faces show a certain emptiness. Once he gets them alone in a room, he tells them he’s not there for sex, but to hear their stories and offer a second chance.

“What you learn is that none of these girls would have chosen this life,” said Forman.

Not all women welcome his surprise with open arms. While some give way to weeping, saying they’ve been waiting for a rescuer like him, others are indifferent and unaccepting of his proposal. But the retired cop has never encountered an angry or resentful reaction from the women for whom he puts his own life and the lives of others on the line.

Every “mission” is riddled with safety protocols. Brown freely admits to the dangers of his undercover operations. He first surveys the scene and assigns his church members prime locations, ensuring the cops are on speed dial for the duration of the process. The eight-minute deadline, Forman told Entertainment Weekly, is strict and self-imposed for Brown, whose personal experience taught him that girls have eight minutes to return to their pimps and express suspicion about Brown before the pimp comes for her, which would pose serious risks.

For eight minutes, they make their case. Brown details what he has personally witnessed as a former cop, including the murder of prostitutes by their clients. Two other team members share their own stories as former sex-industry victims and vouch for Brown’s credibility.

If the woman is talked out of prostitution, she is sneaked into a van, rushed to a safe house, and later removed from the city or state, after which the church team facilitates her rehabilitation at a halfway house. If not, they leave her a phone number and assurance of their assistance if needed, then conclude all intervention efforts. The success rate is “about 50-50,” according to Forman, and the show does follow the women who accept Brown’s offer of rescue and subsequently undergo a “fairly intensive” program.

The unique confluence of faith, drama, and transformation of 8 Minutes drew Forman to the show, he said. Real people—a church group, no less—sacrificing their time and security to aid others on their own initiative makes for a story with dramatic yet authentic appeal.

“It’s already as real as it can possibly be. We’re just trying to not screw it up. It’s about as raw as any show I’ve made since I left hard news,” Forman told Entertainment Weekly. “It’s rare as a reality producer to look at something and say, ‘There’s nothing I would change to make that better for television.’”