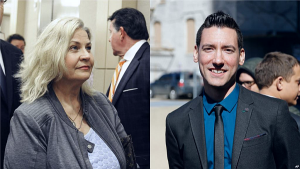 California Attorney General Xavier Becerra filed 15 felony charges against both David Daleiden and Sandra Merritt. Becerra is a longtime abortion advocate with financial connections to the Planned Parenthood abortion company that the two pro-life Advocates exposed in the videos for selling body parts such as fetal brains and livers.

At the time, pro-life advocates said Becerra’s 15 felony charges were bogus charges meant to belittle the expose’ campaign and to cast aspersions on Daleiden and the organization behind the videos. They said the attempt was about drawing attention away from Planned Parenthood’s sales of aborted baby parts.

The San Francisco Superior Court on Wednesday dismissed 14 of 15 criminal counts but the pair are still charged with one count of conspiracy to invade privacy. However, the court dismissed the charges with leave to amend — meaning Becerra could re-file the charges with additional supposed evidence against the pair.

The court ruled that counts 1-14 were legally insufficient. The state has the opportunity to amend if it can plead a more legally sufficient and specific complaint. The California Attorney General filed 15 criminal counts against Merritt, with counts 1-14 for each of the alleged interviews and count 15 for an alleged conspiracy. San Francisco County Superior Court Judge Christopher Hite gave the state attorney general’s office until mid-July to file a revised complaint.

In a statement, pro-life attorney Mat Staver of Liberty Counsel, representing Merritt, said, “This is a huge victory to have 14 criminal counts dismissed.”

“We will now turn our attention to dismissing the final count. Sandra Merritt did nothing wrong. The complaint by the California Attorney General is unprecedented and frankly will threaten every journalist who provides valuable information to the public. This final count will also fall,” said Staver.

Liberty Counsel argued that the criminal complaint for illegally recording supposedly “private” conversations (in restaurants, hotel lobbies and other public places) – the first ever filed against undercover journalists – was legally deficient for numerous reasons, not the least of which was the Attorney General’s decision to prosecute Merritt in secret proceedings, without identifying even the names of her accusers or purported “victims.” The complaint did not provide Merritt with the minimum notice required by the Constitution and California law as to what she supposedly did wrong, so that she can mount a proper and vigorous defense. The complaint was also vague and full of inconsistencies.

“Today we asked the San Francisco Superior Court to dismiss these outrageous and baseless charges against Sandra Merritt, and the court agreed to dismiss 14 of the 15 counts” said Horatio Mihet, Liberty Counsel’s Vice President of Legal Affairs and Chief Litigation Counsel, who appeared with Sandra in court today. “Sandra did not break any law and the criminal complaint against her is legally deficient, vague and full of inconsistencies. No other citizen journalist or organization has ever been charged with a crime for undercover recordings,” said Mihet.

These charges were the second set of charges filed against Daleiden and Merritt as the first were filed by pro-abortion prosecutors in Houston. Those charges were also eventually dropped and were condemned as bogus political charges.

Today’s decision by the San Francisco Superior Court seems to lend additional credence to the fact that abortion advocates and their pro-abortion friends in politics are filing the charges for political rather than substantive reasons.