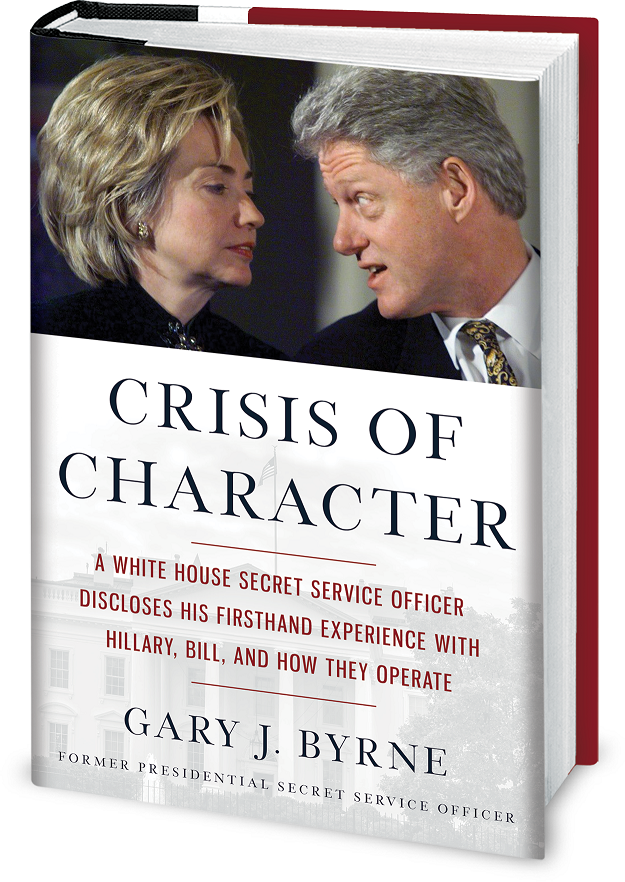 Gary Byrne’s Crisis of Character contains shocking new details about the Clinton administration. Working as a member of the White House Secret Service, Byrne witnessed a severe deficit of character in the administration, from Bill Clinton’s many sordid affairs to Hillary Clinton’s explosive temper at the smallest of infractions.

What he witnessed convinced him that the Clintons should never regain the White House. Here are five of his most shocking accounts.

When not in public, Hillary was unfailingly rude to her security detail. She held a grudge against them from Bill Clinton’s presidential campaign, when the officers would follow protocol instead of heeding her staffers’ orders. Byrne recalls a time when a campaign event was starting and staffers urged them to let attendees in without screening them. As this was against protocol, they refused and continued screening. This instance, along with the fact that some Secret Service agents used to work for Republican President George H.W. Bush, convinced Hillary that the Secret Service was sabotaging her husband’s presidency as part of a right-wing plot. It got so bad that if a Secret Service officer were to say, “Good morning, first lady,” she would respond, “Go f— yourself.”

Byrne writes, “Assignment to her detail was a form of punishment handed down by passive-aggressive management.”

After Byrne saw Lewinsky call Clinton from the Roosevelt Room, he had a stunning realization: the president had given her his number. The only direct number to the president is a top-secret phone line that connects “senior military brass” to the president. It is hyper secure, requiring a four-digit passcode that depends not only on the numbers entered but also the way they are entered—“how long each digit key is depressed and even how long the pauses between digits last,” he explains. To give such privileged intel to an intern is unthinkable.

At the James J. Rowley Training Center, the Clintons were given the opportunity to shoot several weapons. Hillary loved every second of it:

“The First Lady took a surprising liking to firearms, especially a Thompson submachine gun, an original and an American classic, Al Capone’s legendary “Chicago typewriter.” When Mrs. Clinton let loose a spray of man-stopping .45 ACP rounds into the paper, dirt, and berms of our outdoor one-way range, I thought she’d erupt in a maniacal laugh. She just smiled ear-to-ear. Most newcomer women shy away, but not her. If not for the Assault Weapon Ban, she probably would’ve taken the Thompson home with her. Her next shots zipped right into the target’s crotch. Everyone chuckled, turned away, or glanced at the president.”

When Clinton won the White House, he was followed by a multitude of young, radical, and unprofessional staffers. The sticker incident is but one example of their unprecedented disrespect. When Byrne stepped in to stop them from putting up stickers, they were unrepentant, saying, “This is our house now.” The West Wing cleaning staff had to painstakingly remove each sticker without leaving marks or damaging the furniture. The staffers had their badges revoked.

The first couple argued loudly and frequently, their voices carrying through halls and stairways. On one occasion, Byrne saw the president with a black eye after an argument–the same argument that left a White House vase shattered. Hillary’s rage was hot, violent, and quick to rise. Byrne notes that many staffers turned to alcohol and drugs to deal with her temperament.

With such scandalous revelations, it is no wonder that the Clinton machine has dedicated so much manpower to discredit Byrne. The book validates the public’s growing distrust of Hillary’s character. It reminds us of the Clintons’ countless scandals and the deficits in their leadership. It is a message from someone who knew them personally, and it is a message we would do well to heed.