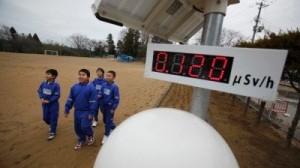 (NaturalNews) Beta radiation levels are off the charts at monitoring sites all across North America, according to new reports. But experts are blaming these radiation spikes on practically everything except for Fukushima.

Data gathered from tracking units in California, Arizona, Illinois and elsewhere reveal radiation levels up to 50,000 percent higher than what was observed at the same time last year, and in some cases compared to levels seen this past summer.

EnviroReporter.com says the impacted sites are scattered throughout the country and aren’t just confined to the West Coast. Readings taken near Los Angeles; Chicago; Montgomery, Alabama; and Madison, Wisconsin, reveal total beta counts per minute (CPM) greatly exceeding the 1,000 CPM threshold considered by the government to be problematic.

San Diego appears to be one of the hardest-hit areas, with a CPM reading of 650, as of October 1. This figure is 60 times higher than it was last year on the same date, despite the fact that San Diego’s normal background radiation rate typically hovers around 20 CPM.

“Over a dozen metropolitan test sites have registered four-month highs in EnviroReporter.com’s most recent comprehensive assessment.”

Commenting on the situation, one EnviroReporter.com reader offered his own assessment that these readings are “astronomically high.” He was quick to denounce Fukushima as a possible cause, though, adding that this would only be possible if “something there has changed dramatically.”

Either way, the radiation levels being detected are still a major cause for concern. Anything above 100 CPM is considered by the California Highway Patrol (CHP) to be a potential hazardous materials situation requiring the deployment of hazmat protocols.

At a testing site in St. Charles, Illinois, located just west of Chicago, a recent peak reading of 7,298 CPM caught the attention of some environmental activists, who chided the media for remaining silent on the issue.

This reading represents a nearly 7,300 percent radiation increase beyond CHP’s safety threshold. This site apparently experienced a series of massive radiation spikes beginning at approximately 1:00 am and lasting for as long as six hours.

Back in California, county officials in San Mateo recorded radiation levels at a local beach measuring 100 micro-REM per hour, or 1 microsievert per hour, which is five times the normal amount. According to the Half Moon Bay Review, local environmental health director Dean Peterson was quick to denounce that this level poses any risk to human health.

When asked where this radiation might be coming from, Peterson admitted that he is “befuddled,” but also denied that Fukushima could possibly be a cause. Instead, he says, it may be due to an excess of disposable eating utensils polluting the area.

“I honestly think the end result of this is that it’s just higher levels of background radiation,” stated Peterson to the HMB Review, adding that red-painted disposable eating utensils can also contribute to localized radiation spikes.