PHOENIX (BP) — The New England Patriots looked all business as they stepped off the airplane in Phoenix for this weekend’s Super Bowl.

Sports commentators noted there weren’t many smiles coming from a team dogged in recent days by allegations involving under-inflated footballs in their AFC title victory Jan. 18 against the Indianapolis Colts.

Though the organization is known for its successes and “business-trip” approach to the big game, players on this season’s team shared during Media Day (Jan. 27) how winning is better when kept in proper perspective. On a team from the Northeast, outside the Bible Belt, where there are few evangelical churches, there seems to be a solid group of Patriot players who don’t shy away from sharing about their Christian faith.

Special-teams star Matthew Slater is one of those players. To a crowd of reporters at the US Airways Center, Slater acknowledged the recent controversy and negative media attention was “unfortunate.” But he noted his faith helps him keep a positive outlook.

Slater said he feels blessed to have played in the NFL for the Patriots the last seven seasons.

“Football is temporary,” he said. “It’s going to be over for all of us at some point. But I think when you look at a relationship with Jesus you understand you’re living for eternity and if you can’t get excited about that, I don’t know what you can get excited about.”

The four-time Pro Bowler, known for his exceptional ability to chase down punt returners, said in the NFL there are a lot of positive stories and “a lot of good men that are living for eternity … and [we’re] just gonna keep fighting the good fight one step at a time, one day at a time.”

Patriot defensive lineman and 11-year veteran Vince Wilfork made headlines as a “Good Samaritan” Jan. 19 for helping rescue a 38-year-old woman who rolled her Jeep Wrangler in Foxboro. The accident happened only hours after Wilfork helped the Patriots win the AFC title, the Boston Herald reported.

In a separate press conference Jan. 28, Wilfork spoke about his faith and family by crediting both with helping him get to where he is today.

“That’s one of the things that I always lean on when things get rough, when things get tired,” the five-time Pro Bowler said. “… My family and faith, I would take it over football any day. … Without them, I wouldn’t be who I am and I understand that and I cherish those moments with my family and my faith and my friends. I cherish all of that.”

Devin McCourty, the Patriot’s starting free safety, said striving to be “rooted” in God’s Word and his Christian faith gives him a “great foundation” to lean on daily. Playing in the NFL or in a Super Bowl shouldn’t define a person, he said. McCourty has played for the Patriots the last five seasons and was named to the 2011 Pro Bowl team. This season he’s made 68 tackles and intercepted two passes.

“I don’t really think anything in this game we do defines who we are as people,” he said. “It’s a blessing…. It’s a great opportunity … [to] take advantage of the opportunity but still know who you are as a person.”

McCourty spoke fondly of the team’s new chaplain, Jack Easterby, and said he counsels players to live in a way where people can see “God all over you.” 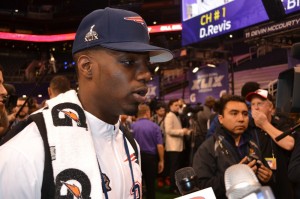 Football is “a game that God blesses us with to use … for His glory and His work,” said Duron Harmon, a defensive back for the New England Patriots. Harmon was one of several players who shared about their faith during Super Bowl Media Day (Jan. 27). Photo by Shawn Hendricks/BP

Duron Harmon, a defensive back for the past two seasons with the Patriots, referred to Christ as his “everything” and his “rock.”

“A lot of people get [their priorities] mixed up, they try to put football first,” Harmon told reporters. “But you gotta remember that football is nothing more than a game. It’s a game that God blesses us with to use … for His glory and His work.”

Kickoff for the Super Bowl, Sunday, Feb. 1, is slated for 6:30 p.m. Eastern from the University of Phoenix Stadium in Glendale, Ariz. The game will be telecast on NBC.