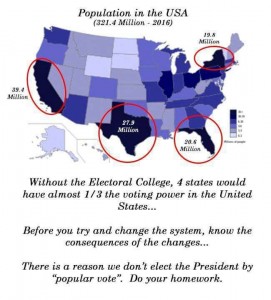 If you can’t win by the rules… change the rules! Crazy? Maybe – but no one has ever accused the far left of being sane when it comes to their plans to seize power, gain control and skew elections.

Now, the latest plot to undermine the electoral process proves again that there’s nothing less democratic than the Democratic Party. They’ve hatched a plan to use the courts to forever change presidential elections by doing a complete end run around the Electoral College.

The system was set up to stop a handful of powerful, populous states from dominating the electoral process by giving smaller states a stake in the outcome. It’s worked exactly as intended, so of course the left wants to abolish it.

That would take a constitutional amendment, which has about as much a chance of happening as Hillary Clinton being named Queen of England, so they’ve cooked up another plan.

Harvard Law School Professor Lawrence Lessig – a liberal activist and, briefly, a Democratic presidential candidate himself – intends to file lawsuits in 48 of 50 states, according to a report in Fox News.

The reason? He’s not happy with the winner-take-all system, in which those 48 states give all their Electoral College votes to the winner of the state’s popular vote. “With a winner-take-all, most of America is ignored,” Lessig griped to Fox News.

But it seems more likely he’s influenced by his own analysis, which finds this system would have given Clinton precisely 270 votes in the Electoral College – exactly the number needed to win – compared to 267 for Donald Trump.

Amazingly, Lessig is even upfront about another part of his plan: to essentially disenfranchise older white Americans, who tend to vote Republican. “Winner-take-all radically concentrates the campaign for president in a dozen or so ‘swing states,’” he and former Bush ethics czar Richard Painter wrote in USA Today. “The voters in those states are older and whiter than Americans generally. No doubt they deserve to be represented just as any American does – but only proportionally to their size.”

He’s gone from wanting states to be represented according to their size… to wanting to voters to be represented along racial lines and age groups. Where does it end? The only place it can: With a system that can finally ensure that liberals can rig every election so that they win, while the majority of the voters – no matter what their skin caller – is marginalized.

Since the left can’t win with that plan at the ballot box, they now will attempt to do so in the courts. Can it succeed? Probably not; Lessig is not exactly known for rational thought. He recently wrote a blog post fantasizing about a Trump impeachment that also causes Mike Pence to quit, Paul Ryan to nominate Hillary Clinton to be his vice president, then quitting himself so that she could take over.

“Of course, this is the sort of thing that’s unimaginable in Washington today,” he wrote last week. “But that’s why we need to start imagining it, now.”

That’s quite the imagination.