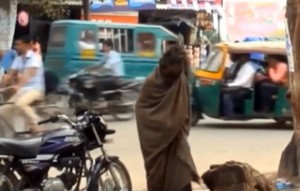 John wandering in the streets of Lucknow

Mentally disturbed, he lived in the streets of Lucknow, India, and responded violently to anyone who attempted to approach him. But God moved one pastor’s heart to take him in, and the love of Jesus transformed the man’s life.

“When we first met John he was very violent and threw stones at people he met. The local police and two students had to help me bring John to the Mercy Home,” says Pastor Paul, who started the outreach to the mentally ill. Mercy Home is a ministry of Empart, which plants churches throughout Asia.

For several months John did not speak to anyone at the facility. He resisted bathing or changing his clothes. His eyes stared ahead of him blankly, according to the staff.

“I was in India when John was brought to our Mercy Home,” says Brian Lockhart, president of Empart USA. “John was physically wounded and could only be described as despondent and detached. There was visible anger inside him and he recoiled from any touch, rejecting those trying to love him.”

Through minimal bits of information they could obtain, the man seemed to have a troubled upbringing. “John was rejected all his life, never loved, and never cared for.

There was only darkness,” notes Pastor Paul’s wife, Bincy. “John still doesn’t remember his past or his family.” “We prayed for him, cared for him, and loved him, and John began to respond,” she says.