Destroying Monuments and Lies About Race 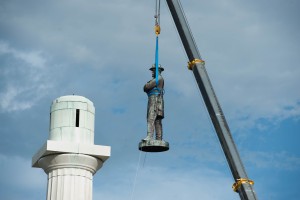 While in Baltimore visiting my 89-year-old black dad, I thanked him for filling me and my four younger siblings with the Word of God. I told Dad how I would hear a minister on TV begin reciting a verse from the Bible and find myself reciting the verse along with him. I wondered how I knew that verse from the Bible. Then, it dawned on me, Dad filled us with the Word of God when we were kids. Dad chuckled and told me a story.

Aunt Nee asked Dad to deliver a payment to the Christian book store for a book she ordered. While browsing the store, a thick book of Bible stories with beautiful illustrations caught Dad’s eye. An older white woman saw Dad’s interest in the book. She approached Dad and asked him questions about himself.

The book cost $5.95. Dad asked if he could put the book on lay-a-way. Overhearing Dad’s conversation with the store clerk, the white woman offered to pay for the book. Dad said back then, he was not much of a reader, only comic books. Dad’s voice cracked and his eyes welled up when he told me this next part of his story. He told the white woman, “If you’re kind enough to buy me this book, I promise to read it.”

Dad read his five kids bedtime stories from that book which filled us with the Word of God. Dad said that book turned him into an avid reader which led to him becoming Dr. Rev. Lloyd E. Marcus, author and pastor of numerous churches. Dad also became Baltimore City Fire Department’s first black Chaplin. Dad’s encounter with the kind white woman in the Christian book store happened over 50 years ago. Seeing him get emotional while telling me about the incident surprised me.

In the early 1960s, our school bus of black students from neighboring Pumphrey was the first to integrate Brooklyn Park Jr/Sr High School in Maryland. At my 50th high school reunion, I learned that white coach Mangum regularly brought black athletics to his home on weekends for his family’s cookouts and mentoring. I never knew blacks and whites socialized outside of school.

I am confident most of you could share wonderful tales of interracial friendships, acts of kindness and people overcoming their differences.

Leftists are the ones who seek to keep the racial divide going. Leftists love to promote rare incidents of racism while purposely ignoring the normalcy of Americans getting along.

By voting for Obama, white America clearly hoped to end our racial divide and apologize for slavery. Meanwhile, Leftists relentlessly promote their lie that America has not changed racially since the 1950s. Leftists say the only way to make things right (fair) in America is for government to control every aspect of our lives, get rid of the Constitution and force us to behave according to their socialist/progressive beliefs (anti-Christian, anti-America and anything goes morally). This is why Leftists cheered every time Obama overrode the Constitution with an illegal executive order that repealed another of our Constitutional rights.

During my Baltimore visit with Dad, several relatives stopped in to say hello. They were sympathetic to Colin Kaepernick who started the movement to diss our flag. They also sided with the thugs who are destroying Confederate monuments. Every black relative I spoke with was doing well, living their American dream. And yet, their anti-America and anti-Trump mindsets felt like an impermeable black cultural thing. Fake news media feeds their negative views of America and Trump. All my truths in defense of America and Trump fell on deaf ears. I felt like a stranger in a strange land, a voice of truth crying in the wilderness.

Jesus instructed his disciples, “If any place will not welcome you or listen to you, leave that place and shake the dust off your feet as a testimony against them.” This is the approach I’ve taken with my relatives who refuse to believe the truth about the greatness of America and Trump striving to make her great for all Americans. I move on spreading truth elsewhere.

Unfortunately, I am hearing news reports of more American institutions, churches and so on getting rid of confederate symbols and monuments. All this mayhem over historical monuments is bought and paid for by George Soros.  I hate seeing Americans surrendering to Soros’ hired evil hit squads. Leftists have launched their minions to wreck havoc in our streets because they cannot tolerate having a president in the White House who has America’s best interest at heart. Pure and simple.

I long to see a John Wayne American who will say, “Screw you, we’re not taking down historical monuments.” Bullies are typically cowards. All we need is people willing to stand up to them.