Did You Know Israel is the Fifth Largest Arms Supplier in the World?

Israel has been rated as the world’s fifth largest arms supplier, following the US, Russia, France and Germany.

Israeli weapons manufacturers racked up a whopping $1.26 billion in sales last year, according to a survey by the Stockholm International Peace Research Institute. 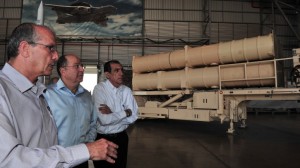 Over half of those sales ($715 million) were to India. The next largest customers for Israel’s arm industry are Vietnam ($142 million) and Azerbaijan ($137 million).

Sadly, being a good customer doesn’t seem to include diplomatic support. Both Vietnam and Azerbaijan, despite maintaining solid business and military connections, routinely vote against Israel at the United Nations.

Israel is ranked 18th among importers of arms, having spent $528 million last year. Nearly all (97.5 percent) of Israel’s arms imports come from the US, with the remainder coming from Germany.