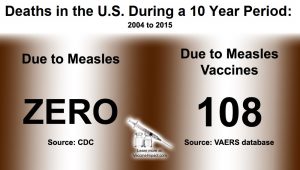 Measles has become the cause célèbre for conventional medicine and mainstream media in order to convince us that we need the measles vaccine. Furthermore, the Powers-That-Be are using everything they can about measles to stop any anti-vaccination talk.

Let’s get some FACTS straight! Measles can be deadly. So can chickenpox. However, for the vast majority of us—over 99%–measles (and chickenpox) is not deadly. For the person who gets it, it is an annoyance that lasts about a week. Then, there is life-long immunity from measles (and the same is true with chickenpox).

However, a complication from the measles virus can occur. Even death can occur. Every death is tragic and we should do all we can to avoid suffering such a fate from any infection.

The mainstream media keeps talking about how deadly measles is. What they DON’T tell you is that the death rate from measles declined by over 98% BEFORE the introduction of the measles vaccine. This is shown in the picture below:

When my much, much-older sisters were young, they got measles and a host of other childhood diseases and recovered uneventfully. For having measles, my sisters had lifelong protection and would provide their babies with immunity against measles when they were born.

Vaccinated people do not receive life-long immunity from measles vaccination. And, vaccinated women do not provide the strong maternal immunity to their children as the women who had the illness naturally do.

Therefore, the vaccinated mothers have children who are vulnerable to the measles virus. Since the measles vaccine is a live-virus vaccine, all newborns should avoid being around recently vaccinated people. But, that is another story.

The Powers-That-Be are pulling out all the stops to scare us into believing the narrative that the measles vaccine has saved millions of lives (in the US it hasn’t—see picture above) and that every person needs a double dose of the vaccine to be safe.

The new scare is measles amnesia. Measles amnesia refers to those who are recently recovering from the measles infection having their viral antibody memory wiped out of their system. This leaves them susceptible to illnesses which they previously recovered from.

The New York Times (NYT 11.1.2019) article on this subject is titled, “Measles Can Kill Memory Used by Immune System.” The NYT was referring to two new studies (1,2) published October 31, 2019 that show that measles infection can cause lasting harm to the immune system. The NYT claims the measles infection “…erases that memory leaving the patient prone to catching {previous} diseases all over again.”

Further in the article, the NYT states, “In fact, if a person who has received vaccinations for other diseases contracts measles, it may wipe out the protection those vaccines had provided.”

Since the studies were released on Halloween, that is truly scary stuff! IF it were true. But, alas, it is NOT true.

It is true that the researchers found individuals who suffered measles infection had lowered antibody levels after the infection.   That could pose a problem if antibody levels conferred protection against an illness. But research dating back to 1960 has shown this to be false. The 1960 Nobel prize was awarded to Sir Macfarlane Burnet for studying children who cannot produce antibodies.

Agammaglobulinemia is a genetic condition characterized by a lack of production of antibodies. Dr. Burnet found children with this condition, when infected with measles, had a normal course of the illness and recovered uneventfully. He wrote,

“To everyone’s surprise [children with agammaglobulinemia] showed a normal measles course with a typical rash which faded at the normal time and was followed by just as substantial immunity against reinfection as would be shown by any other convalescent. Antibody production is therefore not necessary either for recovery from or for the development of immunity to measles.” (Burnet and White. Natural History of Infectious Disease. Cambridge University Press, 1940)

Dr. Obukhanych also points out the chickenpox, similarly to measles also results in the loss of immune memory cells. That does not mean that chickenpox survivors were suddenly becoming infected with previous illnesses or previously vaccinated illnesses.

Measles amnesia? There is simply no good science showing that those recently recovering from measles (or chickenpox) are at an increased risk of infection from previous infections or from previously vaccinated illnesses.

Where is the data that, in the 1950’s and early 1960’s, that we were having a recurrence of previous infections in measles survivors? As I stated above, the same holds true for chickenpox.

In fact, there is robust data that those who recovered from natural measles infection were protected against a wide range of illnesses and that those same individuals had a lowered mortality when compared to children who did not get the infection naturally.(3)

Other researchers have found a life-long benefit of recovering from measles infection. This benefit includes a lowered risk of asthma, autoimmune disorders, and mortality from heart disease.(4, 5,)

Does measles infection suddenly wipe the immune system clean making the host susceptible to old illnesses? To answer this question, ask the mothers of the kids born in the 1950’s and 1960’s this question: Did your children suffer terrible illnesses they previously had after measles or chickenpox infection? The answer is “NO”!