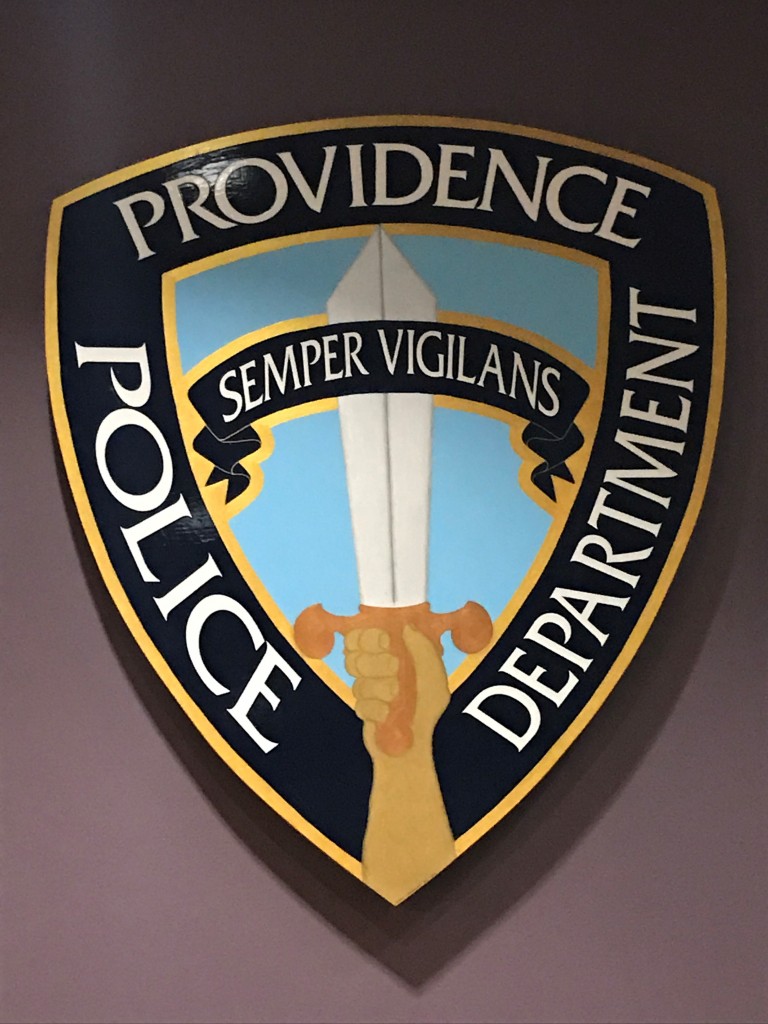 In my wildest dreams, (or nightmares for that matter), I’m pretty sure I couldn’t have foreseen the state of our cultural posture post 9/11. The heroes of that moment in history are now the politicized villains in a game of firsts that many of my generation are struggling to reconcile. And while the article I’m about to write is not meant to champion one side or the other, I was raised by parents who understood and emphasized that our free republic is one of laws and not men. Moreover, they taught me that those laws were to be followed and that our recourse lay in a three-tiered system of government unlike any other in the world. They also taught me that the right of the people “peaceably to assemble, and to petition the Government for a redress of grievances”, while sometimes wholly appropriate and even necessary, is a right which must be exercised with discretion and message, not anarchy and violence, for the latter is for lesser nations.

OK, now that I’ve said my peace, I would tell you as a disclaimer, that I’ve been wearing a uniform a good part of my adult life, and therefore speak from a set of experiences that have changed me, in some ways for the good, in others not so much… So I do have opinions, and those opinions are obviously byproducts of the aforementioned experiences, as are those of different walks than my own. Nevertheless, and as I mentioned at the outset, we are living in times that have me at a loss. For the first time in my life, my hope to leave my son an even better nation than was left to me is diminished.

: But an experience of recent has set me to thinking about solutions again. I suppose that the answer has been there all along, and in conjunction with everything I’ve written about over the years, it’s becoming clearer. To be clear, I still believe strongly that God and family first is the only place we may begin to address what is ailing our inner cities and thus our nation. That said, “community” and faith together seem an appropriate and logical next step. Throughout the Bible, we see faith as the cornerstone of communities, binding mankind together in a common goal and conscience. So in a nation so formed in order to embrace those commonalities for the purposes of the collective good, how then have we fallen away to our current place? Where has the peace and harmony of a free people in “pursuit” of their best destiny disappeared to? What have we lost, or even discarded along the way, and how might we get it back? The answers are many and not simple to be sure. However, I believe I’ve learned a bit about the road forward this past month.

In our system of government, it can be said that our leaders are a reflection of “We the People”, and to some degree I believe this to be true, albeit with the caveats of lazy complacency and purposeful ignorance. But putting politics aside for the moment, because it simply doesn’t seem to be working, who are the real influences in our communities, or rather who should they be? How may we sure up this damaged vessel and begin to bring people back to our national creed. And what really drives our conscious thought more than we even care to admit. Well I’ll tell folks, it’s our faith, that one necessary component which keeps a free society free and binds us as a community and as a people.

So, who shall take the initiative of any faith based solution? Who will offer the voice of that faith as part of a comprehensive and varied approach to the societal ills tearing our inner cities and nation apart? Well I met one Pastor, who on May 2, 2017 oversaw the graduation of the first “Community Chaplain Corps”, or (CCC) in Rhode Island’s capital city of Providence. So what is the CCC you ask? Well, my editor facilitated an invitation to the graduation for me and my boy, and I would tell you that I was originally going to stay only a short while as I was sure I could learn what I needed to in short order. But I realized (when it was over), that the 11 graduates, who hope to bring a message of cooperation and community to the streets of Providence Rhode Island may have just provided an answer… 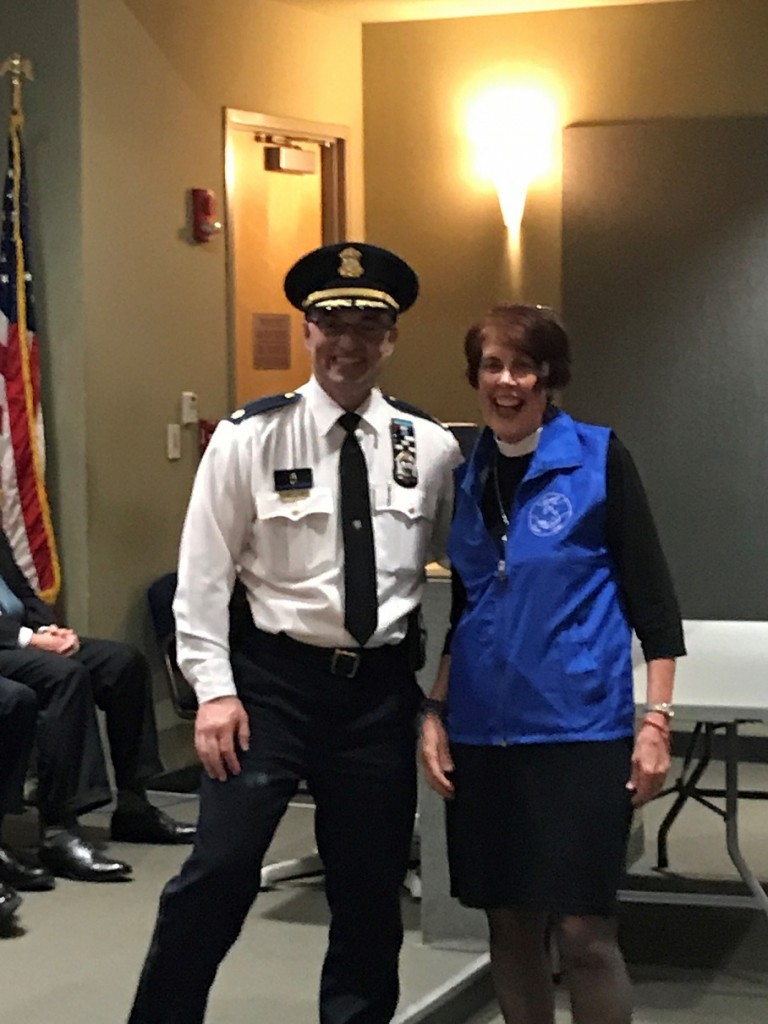 More often than not, there is one person whose initiative and persistence has the effect of helping like-minded folks find their voice. In the case of the Community Chaplain Corps this was the Reverend Dr. Joyce Penfield, Pastor at St. Peter’s and Andrew’s Episcopal Church in Providence, convener of the CCC. And as I would learn at the ceremony, Dr. Penfield had been in the ears of folks like former U.S. Attorney for the State of Rhode Island Peter Neronha, current U.S. Attorney Stephen Dambruch, Colonel Hugh Clements of the Providence Police Department, and Providence Public Safety Commissioner Steven Pare, for some time. I spoke with Dr. Penfield briefly while she was scrambling to get everything in order for the event, and she told me of her many meetings and conversations with Providence city officials ahead of her plan for the Corps, and how she sees her efforts as multifaceted and not necessarily just focused law enforcement.

On its face, the CCC already sounded like a much broader approach than others I’ve researched. Dr. Penfield went on to explain that in the wake of the Michael Brown Shooting and the subsequent “Ferguson effect” in many cities since then, a new approach was needed, and that approach should have a wide lens, focusing on everything from the family unit, to economic strife, drug and alcohol abuse, as well as community policing. She told me that her earliest interactions with city officials and Peter Neronha’s office were productive beyond what she had hoped for, and she felt that while the police department was initially and understandably cautious, all have come to see and understand their common concerns for the community they all live in, thus working together they would all enjoy the obvious mutual benefits of improved overall community relations. 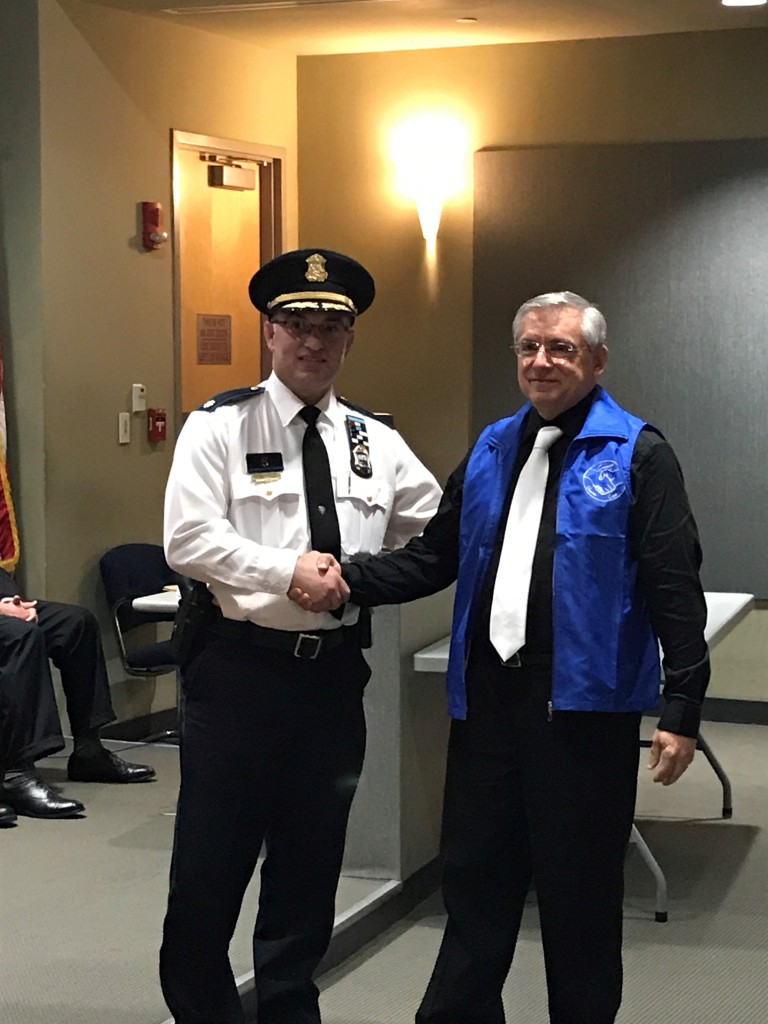 I also spoke with Minister and Civil Rights Advocate, Richard Garganta, who Dr. Penfield had tapped for public relations as she began to bring her group together. Garganta was eager to point out his own experiences as part of the protests after Ferguson, and how he’d come to understand that many were actually showing up not for the good of the community, but rather just to antagonize and disrupt. Garganta explained that it was easy to see Rev. Penfield was on the right track, and that interaction within the community and for the community was going to be a different and more productive approach.

Moving around the room, Rev. Penfield introduced me to who she affectionately refers to as her “Co-Convener “, Pastor Jabulani McCalister. Pastor McCalister reiterated Penfield’s objective of bringing together Providence residents, and faith-based and community leaders to identify ways to enhance communications and prevent problems like Ferguson from occurring in Providence. McCalister referred to his press release in order to educate folks on the focus of the CCC, and said that “each of the CCC graduates had participated in three intensive training sessions and experienced a ride-along with the Providence Police Department. And that their role is to be a calm, neutral, and nonviolent buffer of support to the community. Each member of the multiracial team of about a dozen pastors and faith leaders will receive an identification card and a CCC vest at the ceremony to further identify them as official resources to those they will interact with as well as other on-scene resources”. Personally, I can think of no better way for community faith leaders to experience the challenges of inner city policing, than to ride with the men and women of law enforcement, so they may be witness to the critical and life changing moments happening every day in the city. I would add here though, that many of the programs participants, by way of the very nature of their calling and their own life experiences, know full well those challenges. However, it’s their interaction as a mediator and emissary of faith, and inclusion into a difficult situation as its happening, where they may become that calming and reassuring influence. 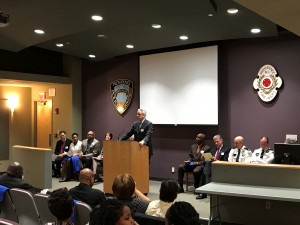 In fact, everyone I spoke with at the graduation was encouraged and hopeful that the CCC program would bring a fresh look to issues, which frankly many of our elected officials seem unable to address. For my part, it is that very non-political and community based approach to our societal ills that will make a meaningful and I believe lasting difference. What better way to build up your community and its residents than to bring that help in the form of chaplains with actual “skin in the game”?

As I wrote earlier in this article I had only planned to stay a short time, but found myself at the end of the ceremony feeling as though I wanted to hear more. Speaker after speaker praised the effort as new and full of promise. A feeling of anxious optimism seemed to fill the room as officials pledged solidarity with the CCC.

Truth be told, I’ve never been more apprehensive about the state of my son’s community and country. The older he gets, the more I worry about what his world will look like when I’m gone. But on that night at the Providence Public Safety Complex, I felt a sense of hope I hadn’t felt in a while. I felt my own faith in my Savior making me stronger, and I knew He could do the same in a crisis situation but for a neutral, non-judgmental person there to make His presence known.

Let’s face it people, we’ve tried all the politics, and those folks have left us in worse shape than when we started. The division ultimately created by way of pandering, unfulfilled promises, and money spent in all the wrong places and for all the wrong reasons has left our inner-city communities in worse shape than at any time in recent memory. And while addressing some of these seemingly overwhelming issues is never an easy task, it’s time for a different look. It’s time for us to be part of our own solution and not be the tools of folks with no vested interest in the outcome or results. To that end, God Bless Rev. Penfield for her initiative, persistence, and hard work, and God bless all those who seek to be part of that solution. 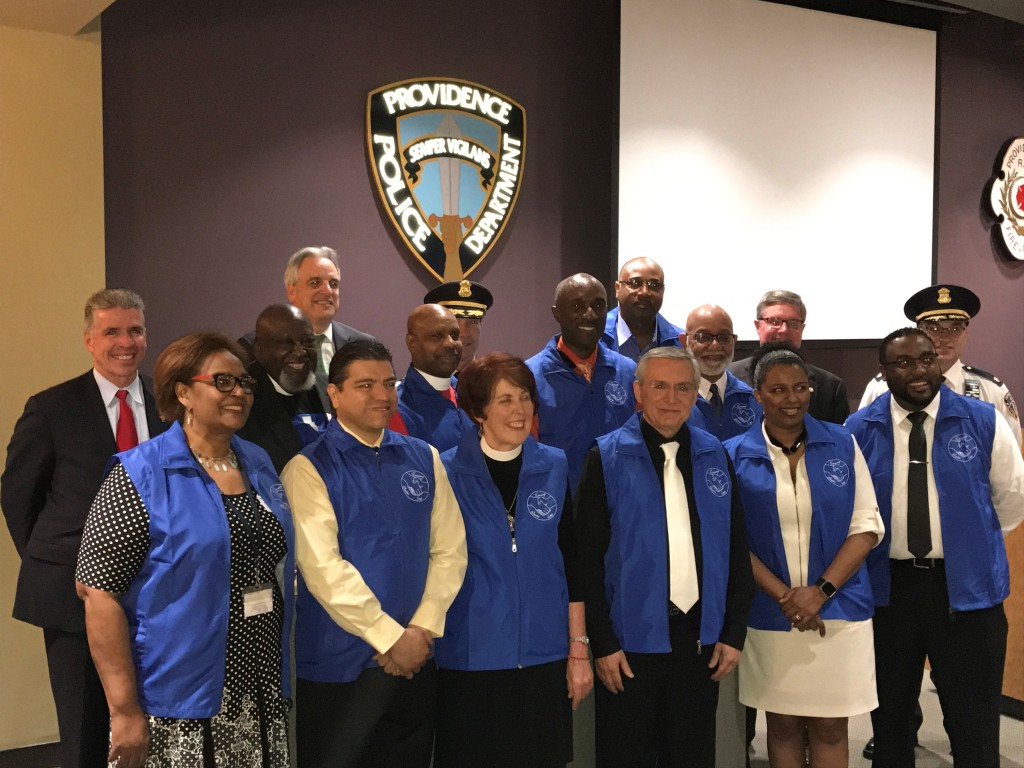 So, as I’m sure their work has already begun, let me say thank you to the CCC for letting my son and I be part of your send off, and congratulations to the pilot graduates: Rev. Dr. Joyce Penfield, Pastor Jabulani McCalister, Mr. Edwin Arroyo Mendez, Ms. Rosa DeCastillo, Bishop Dwight Dove, Minister Richard Garganta, Rev. Charles Jones, Mrs. Belinda Philippe, Chaplain Hance Philippe, Minister William (Bill) Scott, and Pastor Philip W. Wesley, II. Let’s keep these folks and all who will be touched by this effort in our prayers.

You can learn more about this important program at: http://TripleCPVD.com