(WNS)–Bruce Weatherly’s Eagle Scout rank means more to him than prestige, resumé fodder, or a chance to get a college scholarship. For the 18-year-old, reaching Eagle was about honoring his father’s memory.

His outdoorsy, rock-climbing, woods-hiking, and kayaking father died in 2009. Bruce’s mother Lauri Weatherly wanted her sons still to experience male leadership: “Boy scouting in general would be considered, in my eyes, their father.” 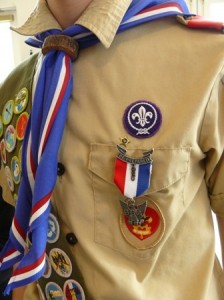 After the Boy Scouts of America (BSA) decided last year to accept openly gay scouts, scouting dissidents created Trail Life USA. With that decision came tension for families, particularly when sons were close to gaining the prestigious Eagle Scout rank, a symbol of ultimate achievement that scouts often list on college applications and use to win scholarships. Six-month-old Trail Life has to contend with that legacy: It offers an “achievement transfer” for boys, but BSA has trademarked the terms “scout” and the names of ranks. BSA has the Eagle Scout; Trail Life has the Freedom Award.

Bruce had written an essay opposing the admission of gay scouts, but he was also two months away from completing his six-month-long Eagle Scout project when his BSA troop in John’s Creek, Ga., disbanded. He had to decide whether to move to another troop and complete his Eagle, or take his Christian principles with him to Trail Life. His mom thought leaving without achieving Eagle rank would be “like dropping out of the race when you see the finish line before you,” but she encouraged Bruce to pray and then make the painful choice. He decided to stay in.

In June, at a Trail Life camp in western North Carolina, troop leaders from North Carolina, Georgia, and Alabama sat around a wooden picnic table. Nearly 100 boys attending the camp were on a hunt for one boy in hiding, in a game called “Saving Private Bryan.” Meanwhile, the leaders told me how many of their boys had “rushed” to get the Eagle during the transitional time after the BSA decision. (In 2013, the second-largest number of boys in BSA history became Eagle Scouts.)

Luke Van Cleave, Bruce’s former BSA scoutmaster and now Trail Life Troop 317 leader, said seven of his former scouts moved to another BSA troop: Five of those boys were close to their Eagle, and two were their younger brothers. One Troop 317 boy, 16-year-old Eagle Scout John Jung, stayed in the Boy Scouts while joining Trail Life because of friends and the potential for further leadership roles in BSA. He said in Boy Scouts “they stack you up on merit badges till lunch.”

Without the “Eagle Scout” designation, Trail Life is emphasizing that its boys will have not sashes but “standards”—wooden staffs that serve as part walking stick, part saber, like what shepherds and bishops and even Moses carried. Trail Life co-founder John Stemberger said a standard is “a little more masculine than a cloth and a patch.” The Trail Life website states the Freedom Award crest includes a “shield of faith,” a “sword of the spirit,” “trinity peaks,” a “mighty stag,” and “crossed keys,” all symbolic and referring to Bible passages.

An Eagle Scout himself, Stemberger said he’s still proud of his Eagle and will pass it on to his sons: “It’s not like I’m going to burn it or send it back or anything like that. Though I respect people who have done that.” Trail Life has to contend with BSA’s 104-year legacy and its iconic place in American culture, evident in Norman Rockwell’s scouting paintings. Stemberger says he has four of these prints hanging in his house: “When I walk by them I feel sad. It’s like part of America died.”