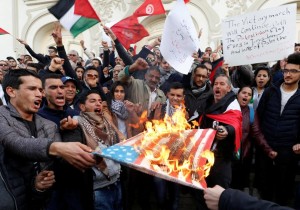 (WNS)–Thousands of Tunisian protesters on Jan. 14 flooded the streets of Tunis, the capital city, on the seventh anniversary of the Arab Spring revolution. The anniversary comes amid more than a week of protests that began after the government hiked taxes on basic goods.

The Tunisian government proposed aid packages to the poor in a bid to quell the unrest but has not offered a long-term solution to the country’s economic crisis.

A new government budget on Jan. 1 increased prices and taxes on basic goods. The government said the move aimed to curb the country’s deficit and satisfy the terms of a loan by the International Monetary Fund. But Tunisians complained the price hikes added to the problems of high unemployment and low wages.

Over the past week, protesters took to the streets in more than 20 towns and cities, blocking roads and sometimes hurling stones at security forces. At least one person died, and authorities arrested approximately 850 people. On Sunday, protesters in Tunis lit flares and chanted, “Power to the people.”

“This is what the government has done to us,” one protester, identified only as Fouad, told Reuters. “I am a professor and my wife is a teacher, but we are suffering today to meet our needs.”

Tunisia emerged as the only democracy among several other Arab nations following the Arab Spring uprising that started in 2011. A group of Tunisian leaders won the Nobel Peace Prize in 2015 for their efforts to preserve democracy and peace amid social unrest. But the country continues to battle economic problems.

A majority of the protesters are students and unemployed young people. One of the leading protest groups, What Are We Waiting For, is calling for a return to the 2011 uprising demands of “employment, freedom, and national dignity.” Fadil Aliriza, a Tunisia-based analyst, said the government’s move to arrest potential leaders of the current protests could lessen its impact. “Without organized leadership and structure, the opposition protests will likely remain volatile,” he said.

Tunisian authorities started to take additional steps to diffuse the tensions. President Beji Caid Essebsi attended the opening of a new youth center during his first visit to the Tunis town of Ettadhamen, which describes itself as the heart of the revolution. Mohamed Trabelsi, minister of social affairs, said the government would increase welfare payments to the needy by $70.3 million. “This will concern about 250,000 families,” Trabelsi said. “It will help the poor and middle class.”

Ebrahim Deen, an analyst with the Afro Middle East Center in South Africa, said the government’s move might contain the protests in the short term. “Whether the government has the money to fund it is a different story,” he said.