“This content will not be introduced to any new Hyatt hotels, and it will be discontinued or phased out at all hotels,” Hyatt said in a recent statement.

Hyatt is following the trend of other major hotels, notably Marriott and Hilton, in getting rid of explicit entertainment options in guest rooms.

The hotel chain gave no official reasoning behind the decision, only saying, “in-room programming choices are just one part of the guest experience Hyatt is constantly evaluating. As part of that process, Hyatt has made the decision to stop offering adult entertainment video on-demand at any Hyatt hotel.” 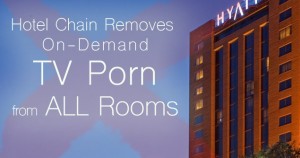 However, it is believed to be a combination of decreased revenue from overall on-demand TV purchases as well as the result of the National Center on Sexual Exploitation reaching out to Hyatt about what the advocacy group calls “the neurological and psychological harms of pornography.”

“With this step, Hyatt is proving itself to be a leader among corporations that value a positive and safe environment for their consumers,” NCOSE’s president and CEO Patrick Trueman said in the statement.

The statement concluded by thanking Hyatt for its part in supporting their cause and fighting pornography, an industry founded on sexual exploitation.

“NCOSE is grateful to Hyatt for its policy change and commitment to oppose sexual exploitation.”

Marriott began phasing explicit video content out of its on-demand services company-wide in 2011, and Hilton made the same announcement in August of this year. Hyatt is now following the same path, and has said that they will be phasing out explicit videos subject to the terms of contracts, and that this change will be effective in their more than 600 properties worldwide.