The video depicts in startlingly realistic computer animation the story of the passion, death, resurrection and ascension of Jesus Christ, as told through the New Testament Gospels.

“The entire script, every word, of my new DVD, ‘Jesus Alive Again,’ is taken from Scripture,” Downing explained to WND in a telephone interview. 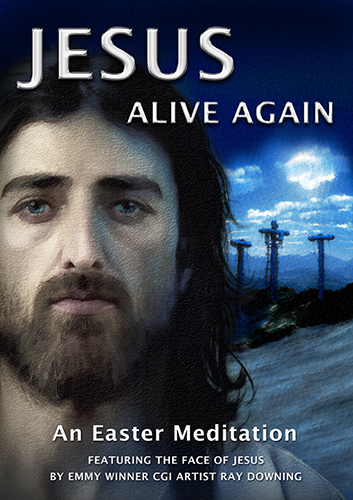 “We took all four Gospels of the New Testament and we put them side-by-side to choose the passages necessary to tell the story,” he said. “We track what happened to Jesus through his passion and crucifixion, thorough his resurrection, and through the 40 days after the resurrection when he appeared to the Apostles risen from the dead.”

‘Astounded by the experience’

Downing stressed the importance of taking his Easter meditation story directly from the words of the New Testament evangelists.

“I wanted the words written by Matthew, Mark, Luke and John 2,000 years ago to speak to the people of today through my film, relating directly their experience of seeing Jesus after the resurrection,” Downing said.

“I think Matthew, Mark, Luke and John are telling us today exactly what those seeing the risen Jesus saw and why they were astounded by the experience. I’m not sure the evangelists knew fully to make of it, but I’m certain they were telling the truth.”

“What does this do for me?” he asked rhetorically. “The accounts of Matthew, Mark, Luke and John make for me the resurrection of Jesus an empirical event, on the same level as scientific observation,” he said.

“The evangelists 2,000 years ago recorded real events. Those seeing Jesus risen from the dead did not understand, but they had to tell someone what they had experienced. The evangelists wrote down those experiences, directly from those who had first-hand experience seeing and being with the risen Christ.”

To create his new DVD, Downing returned to the techniques he first developed in 2010 to animate the 3D image of the face and body seen in the crucified man in the Shroud of Turin.

The Shroud of Turin bears the full-body, back-and-front image of a crucified man that is said to closely resemble the New Testament description of the passion and death of Christ. The 14-foot cloth long has posed mysteries because of its age and its negative image of a bloodstained and battered man who had been crucified. Some believers claim it to be the miraculous image of Jesus, formed as he rose from the dead.

In a 2010 interview with WND, Downing explained how he used today’s most sophisticated electronic tools and software in a yearlong effort to recreate the face imprint on the Shroud of Turin.

“The presence of 3D information encoded in a 2D image is quite unexpected, as well as unique,” Downing said. “It is as if there is an instruction set inside a picture for building a sculpture.”

“I thought it appropriate this Easter to present the words of the gospel narrative without embellishment or commentary and visualize what the apostles saw using our 3D portrait of Jesus based on the Turin Shroud image,” he said.

He said “Jesus Alive Again” is a film about “the voices of people from 2000 years ago urgently telling us what they saw.”

“These voices offer a direct and unembellished accounting of the first Easter,” Downing said. “We invite the audience to see what the apostles saw, which caused them to believe that Jesus was alive again. It is left entirely to the viewer decide for themselves what to make of this amazing story.”

The DVD, following the New Testament account, shows how Jesus after his resurrection appeared suddenly in the midst of the Apostles and was recognized by his gestures, his actions and his words, as much as by his appearance.

“Those who were in the room at the time Jesus appeared risen from the dead do not describe any explosions or special effects, so we decided not to put in any special effects to the ‘Jesus Alive Again’ DVD,” Downing emphasized.

“Yes, Jesus after his resurrection seems to have had the ability to use time and space as dimensions he could move through in a manner not normal for ordinary human beings,” he said.

“The Gospel accounts say Jesus was there, and then he was not there,” he noted. “Jesus seems to appear suddenly in a particular place at a particular moment without having to be seen moving through space or taking any time to get there. Then he just vanished, as in the twinkling of an eye. That’s what I wanted to show in the film.” 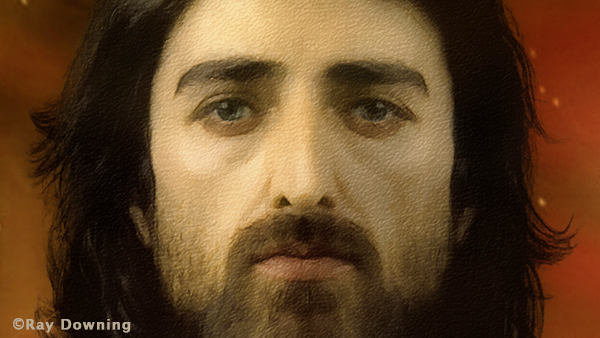 “Jesus Alive Again” depicts well-known scenes, such as Jesus breaking the unleavened bread at the Passover dinner he celebrated with the Apostles on Holy Thursday and again after his resurrection. It also includes the scene in which Jesus invited the Apostle Thomas to touch his risen body and to feel his wounds from the crucifixion.

In the course of the 25-minute DVD, Downing takes the viewer through the events of Christ’s last 40 days on earth so realistically that it is sometimes hard to remember it is computer-generated animations, not actors shot on location.

“I’m saying in ‘Jesus Alive Again’ that the witnesses to the post-resurrection Jesus were describing real, factual things that they saw,” he said. “What needs to happen is the Gospels describing Jesus after the resurrection need to be looked at in that way, realizing these are phenomena that should be explained and understood, not simply believed, but events to be taken seriously as having really happened exactly as described.”

“This is what my work tries to do,” he concluded. He considers the Shroud of Turin to be a possible clue as to what the historical Jesus looked like and what he did in his life on earth.

“We have people who saw Jesus and spoke with him, interacted with him, after his resurrection,” Downing said.

“Consider for a moment that the accounts we have in the Gospels are real, first-hand accounts Matthew, Mark, Luke and John wrote down from people who saw and talked with the risen Jesus and were telling the truth,” he posited.

“What we have then is not a story, but historically accurate first-hand accounts of the Jesus alive after his crucifixion and death that we today should take seriously.”