Major survey finds evangelicals are not losing ground like other U.S. Christian traditions

(WNS)–Christianity is waning in the United States.

That’s the primary finding of a major new survey of American religious belief, published Tuesday by the Pew Research Center. The telephone survey of 35,071 adults from all 50 states found just 71 percent of Americans now identify themselves as some category of “Christian.” (The study included Protestants, Catholics, Eastern Orthodox, Mormons, and Jehovah’s Witnesses in that category.) That proportion is a decline of nearly 8 percentage points since 2007, when Pew conducted its first Religious Landscape Study.

But while mainline Protestants and Catholics saw significant declines in numbers during that period, evangelical Protestants—including Southern Baptists and members of Churches of Christ and the Presbyterian Church in America—have either maintained their numbers or increased slightly. About 62 million Americans say they belong to an evangelical religious tradition, up from about 60 million in 2007, although the margin of error for both surveys means evangelical numbers might have stayed about the same. 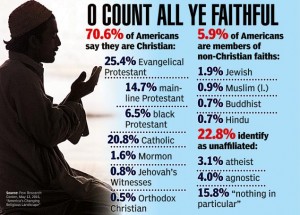 “Evangelicals stand out in terms of the ability to retain our own young people, including millennials,” Albert Mohler, president of The Southern Baptist Theological Seminary, told me. “And that just points to the importance of a strong understanding of the gospel and very clear theological grasp of Christianity.” Churches not holding to a biblical worldview and orthodox doctrine are losing adherents quickly, he said.

The Pew survey found that from 2007 to 2014, the proportion of Americans identifying with mainline Protestant traditions—including the United Methodist Church, the Episcopal Church, and the Presbyterian Church (U.S.A.)—fell from 18 percent to 15 percent. The proportion of Catholics fell from 24 percent to 21 percent.

Meanwhile, more Americans are throwing off any religious identity. The proportion of Americans who describe themselves as atheist, agnostic, or not identified with any particular religion has grown to 23 percent—up from 16 percent in 2007. Unaffiliated Americans are more likely to be young, and they are a fast-growing group: For every religious convert, about four Americans leave their faith tradition to join the “unaffiliated” segment, although they may still pray or consider themselves spiritual.

“What’s disappearing is cultural Christianity,” said Mohler, who expects the decline to continue. “As happened in Europe, it will not collapse slowly—it’s likely to collapse very quickly.”

Evangelicals now make up 55 percent of Protestants in the United States. Even so, the proportion of Americans identifying as evangelical Protestant declined slightly—from 26 percent to 25 percent—due to the increasing U.S. adult population, which grew from 227 million to 245 million between 2007 and 2014.

Pew noted the U.S. Census does not collect data on religion and many other surveys are too small in scope to accurately measure denominational affiliation. According to Pew’s survey, followers of non-Christian faiths have increased slightly, especially among Muslims and Hindus, who now make up 0.9 percent and 0.7 percent of the U.S. population, respectively.

The Pew survey also tracked religious switching—when Americans moved from one faith to another. While faith traditions are losing adherents, they are also gaining them. The rate of turnover may predict the future growth or decline of certain traditions.

“The Catholic church does a poor job educating its youth and socializing them into why they should stay Catholic,” said Christian Smith, director of the Center for the Study of Religion and Society at the University of Notre Dame. “Catholicism is a hard faith for modern people to wrap their brains around, and if they’re not really well-educated into it, it can easily just become kind of an ethnicity or a background identity.”

Smith said his group’s own recent research found half of young Catholics leave their faith between their teenage years and 20s. Committed religious practice among parents seems to be the most important factor in retaining Catholic youth. “If the church wants to do anything, it’s got to get parents on board a more intentional formation of their children and their own lives,” Smith said.

“That is happy news on every front,” Mohler said.

Mohler also noted 2 percent of evangelical Protestants in the survey were raised in non-Christian faiths: “That just tells us that we’ve got an enormous mission field before us, and we’re going to have to learn to be more effective in reaching people who are in other religious belief systems with the gospel of Jesus Christ.”