EXPOSED! THE POWER BEHIND THE WOMEN’S MARCH 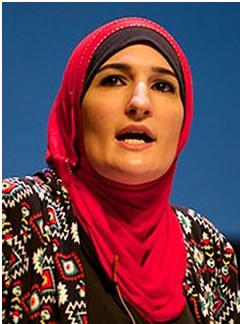 The most persecuted group in the world today is Christians. Christians in Nigeria, Egypt, Syria and other nations are murdered, raped, kidnapped, enslaved and persecuted on a daily basis. The reason for the vast majority of all of this violence is that they are Christian among Muslims.

But their abuse does not stop with the violence. The perpetrators of violence are measured in the thousands, but the greatest abuse is at the hands of those who should demand that the violence stop. The silence in the face of this persecution is denial and justification. The persecutors are few, but the deniers are in the billions. —Professor Bill Warner

Linda Sarsour is a National Co-Chair of the Women’s March on Washington, which took place on January 21, 2017, one day after the inauguration of Donald Trump as President of the United States of America.

Sarsour is a Palestinian-American activist who is the executive director of the Arab American Association of New York. This group will receive $10 million over the next five years, awarded to them by the Mayor of New York City. Sarsour is very vocal about her support for Palestine and her utter hatred for Israel. She was recently spotted at a large Muslim convention in Chicago posing for pictures with an accused financier for Hamas, the terrorist group.

In 2016, Sarsour endorsed Socialist Senator Bernie Sanders for President of the United States, and attended the Democratic Convention as a delegate from the State of New York. 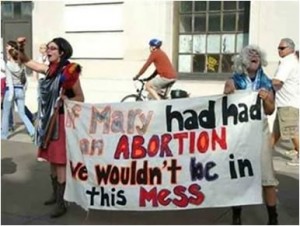 The women in this march celebrate abortion on demand at any stage of pregnancy. No pro-life feminists were allowed. Yet, the Islamic National Co-Chair, Sarsour, and her Muslim brethren have an average of 6.2 children per family. Their goal is to outnumber Jews and Christians via population growth.

An Obama White House “Champion of Change,” Sarsour spoke at the 15th annual convention of the Muslim American Society and Islamic Circle of North America. While there, she posed for a picture with Salah Sarsour, a member of the Islamic Society of Milwaukee and former Hamas operative who was jailed in Israel in the 1990s because of his alleged work for the terrorist group.

Linda Sarsour is very active on Twitter. She is pro Sharia law, and a couple of her tweets even have a seditious tone to them where she romanticizes Sharia law and hints at it taking over America whereby we would have interest free loans. (Islamists do not pay interest on loans).

She tweeted a picture of American women tying on hijabs in solidarity with Islam.

So, women of America, how do you like the fact that the organizer of your march advocates for Shariah Law, has ties to the terrorist group, Hamas, is considered a second-class citizen because she’s a Muslim woman, and is leading your pro-rights Women’s March?

And of course, once again, this march is being funded by the Soros groups. Truly, have these women lost their minds? 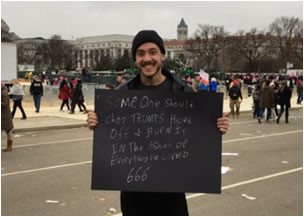 A photograph was taken by an observer of the Women’s March in Washington D.C. that shows a participant holding a sign that calls for the assassination of President Donald Trump. The sign reads, “Someone should chop Trump’s head off & burn it in the ashes of everything he loved. 666”

This is sedition, calling for the assassination of our duly elected President, but even worse, signing it with the number of the anti-Christ is telling. And he’s smiling!

Heather Lowrey, who described herself as a Louisville vixen and aspiring wrestling diva on her Twitter profile, before going into electronic hiding, tweeted the message on January 17, “If someone was cruel enough to assassinate MLK, maybe someone will be kind enough to assassinate Trump. #bekind #trump #lovetrumpshate.”

Her employers soon after fired Lowrey and issued public statements distancing themselves from her threatening tweet. 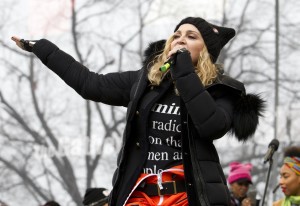 The Secret Service has reportedly said it will open an investigation into Madonna after the singer told the Women’s March on Washington that she had thought about “blowing up the White House.”

She went on to speak of her rage at the election result, telling the crowd she had thought a lot about “blowing up the White House, but knew that it wouldn’t change anything.” 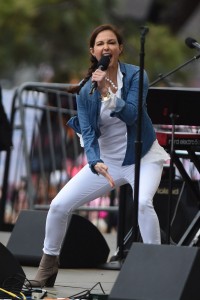 Actress Ashley Judd proudly took to the stage to proclaim the fact that she was glad she was able to abort her baby conceived in rape. Judd proudly repeated the phrase “I’m a nasty woman,” as the crowd of thousands continued to cheer. “And our _____ ain’t for grabbing, they’re for reminding you that our walls are stronger than America’s ever will be,” she concluded.

“Our ____ are for our pleasure, for birthing new generations of filthy, vulgar, nasty, proud, Christian, Buddhist, Muslim, Sikh, generations of nasty women.”

She went on to rant and rave about her monthly periods and why Tampax is taxed whereas Viagra and other men’s erectile dysfunction prescriptions are not. I guess she doesn’t realize that one is a physician’s prescription and the other is an over-the-counter convenience for women.

Samuel Adams said, “He therefore is the truest friend to the liberty of this country who tries most to promote its virtue, and who, so far as his power and influence extend, will not suffer a man to be chosen into any office of power and trust who is not a wise and virtuous man…The sum of all is, if we would most truly enjoy this gift of Heaven, let us become a virtuous people.” Virtue was absent at the Women’s March.

And Thomas Paine stated, “Those who expect to reap the blessings of freedom, must, like men, undergo the fatigue of supporting it.”

President Trump has given up a life of ease to take on the huge task of righting our beloved nation, not just for his own descendants, but for all of the Americans he loves and cares about.

And like President Trump, singer Lee Greenwood is the epitome of true patriotism. Back in 2015, when Lee Greenwood crossed paths with the U.S. Army Chorus, they shared a profoundly patriotic moment in the tunnels of Nationals Park, Washington, D.C. In honor of Lee and the amazing patriotic impact his music has had on our nation, may God Bless you, Sir, and God Bless the USA!

There’s a New Sheriff in Town

Former Wisconsin Senator Joseph McCarthy said, “The reason why we find ourselves in a position of impotency is not because the enemy has sent men to invade our shores, but rather because of the traitorous actions of those who have had all the benefits that the wealthiest nation on earth has had to offer – the finest homes, the finest college educations, and the finest jobs in Government we can give.” 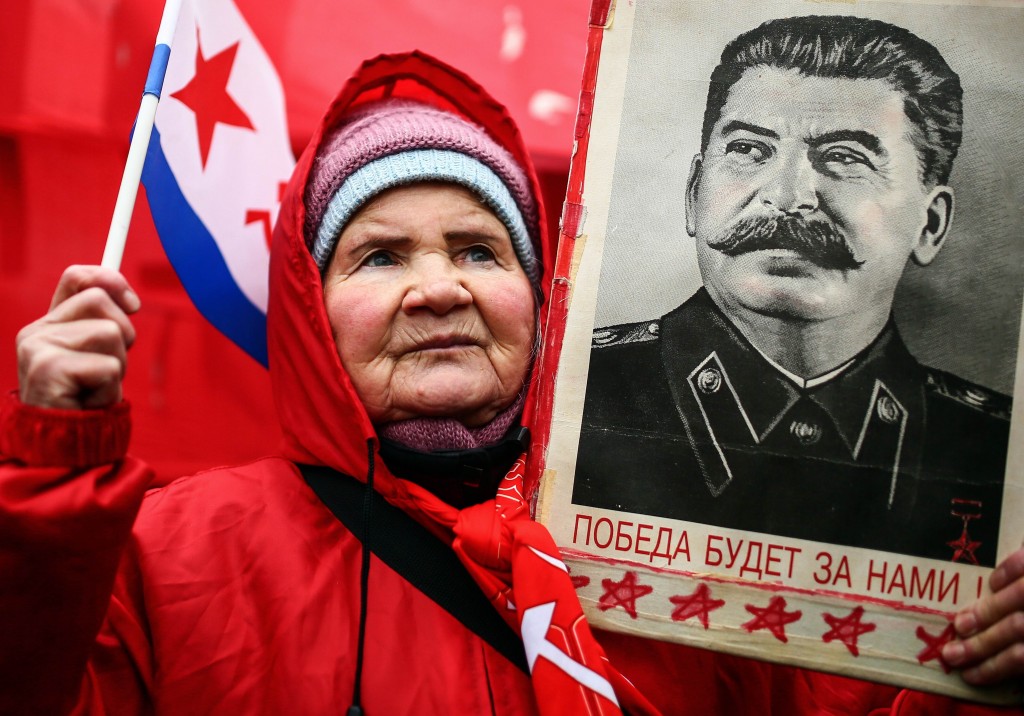 Those days have now come to an end, and the liberal Socialists are rebelling. Journalist Daniel Greenfield said it far better than I ever could, “There were those who celebrated and those who mourned the fall of the USSR. So too there are those who celebrate and those who mourn the end of Obama. The tears of leftist hipsters crying over Obama are no different than those of the old women holding up Stalin’s portrait on May Day in the Red Square.”