LOS ANGELES, CA – ‘SLAMMA JAMMA,’ the new faith-based basketball movie is earning high marks as the film opened yesterday in theaters across the country. The film has earned an 8.7 on IMDB and a 95% approval rating among audience reviewers.

“We purposefully kept the film away from critics,” says a spokesperson from RiverRain. “Most film critics are wonderful, fair people with a real heart, but you have the ones who are simply ‘mean-spirited’ and refuse to give any faith-based film a good mark because we’re not part of their ‘tribe.'” 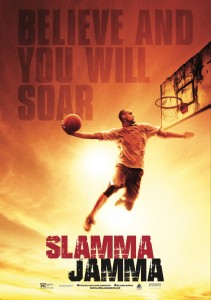 Case in point is one film critic from AV Club who called the director an “evangelical shlockmeister.” “I don’t let these guys bother me,” says Tim Chey, the director. “We forgive and leave it to God to avenge us. We’re changing people’s lives and satan hates our guts.”

Audiences are raving about ‘Slamma Jamma.’ At a recent screening, one person said, “You have to cry. Amazing movie.” Another attendee said, “‘Slamma Jamma’ rocks. The best basketball movie ever made” Yet another said, “This film has heart all over. Truly uplifts God in everything and was well-acted and made.”

SLAMMA JAMMA has one of the highest-rated pre-screenings across the country for a faith-based sports film.
“I have yet to see anyone not cry,” says Dale Carroll, the co-producer. “Grown men cry. Athletes cry. It’s very impactful. You have to actually see it to understand what I’m talking about.”

Stephen A. Smith of ESPN says the film is comparable to ‘Rocky.’ “If you liked ‘Rocky,'” says Smith, “you will love ‘Slamma Jamma.'”