By The Good News Today staff 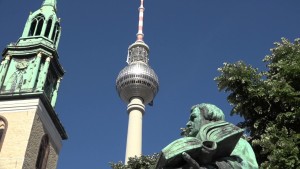 STANISLAUS, Calif. – Richard Weikart, an author and history professor at California State University, Stanislaus, recently teamed up with Emmy-Award-winning cinematographer and producer Jim Gromer on an exciting documentary project. To commemorate the 500th anniversary of the Reformation, they filmed at many sites in Germany and Switzerland where Luther and other Reformers made history.

Their film, “Exploring the Reformation and Revivals in Germany,” was recently released and is freely available on youtube. It is about a half-hour long and is designed for use in churches, schools, and colleges. The film is educational, but also spiritually stimulating, because it brings us to reflect on the way that God has intervened in the past to bring revivals in the midst of darkness.

The film begins with the story of Martin Luther, who nailed his 95 Theses on the church door in Wittenberg on October 31, 1517. This sparked a dramatic religious upheaval in Europe. Luther and the new Protestant movement taught that salvation comes through faith alone. He also insisted that scripture-not the pope or the church-is the highest authority. Further, Protestants taught that everyone has direct access to God and doesn’t need to use intermediaries, such as saints or priests.

The ensuing Reformation spawned new denominations and movements that broke away from Catholicism. These included the Lutherans, Calvinists, Anglicans, and Anabaptists, from which all the major Protestant denominations have descended.

In addition to explaining the Reformation, Weikart and Gromer’s documentary also discusses two subsequent religious revivals in Germany that tried to restore the ideals of the Reformation.

The Pietist movement in the late seventeenth and early eighteenth centuries, produced a powerful mission movement within Protestantism that had world-wide effects. Another revival, the Awakening Movement in the early nineteenth century, produced many charitable organizations. Some of these, such as the deaconess institution in Kaiserswerth where Florence Nightingale trained to be a nurse, still exist and appear in the film.