Fines for worship, prison for Bible study in China

In late April, a court in Xinjiang convicted five Protestants who attended a Bible study in 2016, charging them with “gathering a crowd to disrupt social order,” Asia News reported. The verdict came with five-year prison sentences for two pastors, and four- and three-year sentences for three others. They plan to appeal.

Earlier in April, authorities raided a Christian concert and arrested those attending. Taiwanese Pastor Xu Rongzhang was singing “Jesus Loves You” when the raid took place, China Aid reported. Before releasing them, officials forced the Christians to say they would not organize large gatherings again and told Xu not to hold any meetings of more than 10 people.

A Chinese court also recently convicted prominent Christian human rights lawyer Li Heping on charges of subverting state power. Judges sentenced Li to three years in prison but suspended the sentence for four years. If he does not reoffend during that time, Li will stay out of prison. 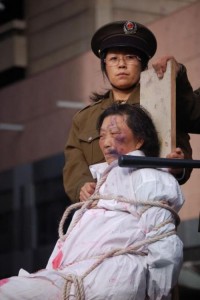 Since 1997, Li has defended dissidents, victims of forced evictions, and members of the banned Falun Gong religious group. Officials detained him and nearly 250 others in 2015, in what Amnesty International condemned as a nationwide crackdown against human rights lawyers and activists. Amnesty said the Communist Party’s official newspaper described it as an attempt to destroy a “major criminal gang.”

Several of those lawyers and activists remain in detention, even though Western governments urged Beijing to release them.

Earlier this year, officials in Xinjiang targeted a network of Christian house churches and arrested more than 80 people. They fined and later released them, according to China Aid.

All these incidents illustrate the worsening persecution of Christians under President Xi Jinping’s crackdown on religious activity and human rights. Critics say he wants to eradicate any potential opposition to the ruling Communist Party.

Because religious freedom in China continued to erode in 2016, the U.S. Commission on International Religious Freedom (USCIRF) called on the U.S. State Department to keep China listed as a country of particular concern in its recently released 2017 report.

A campaign to remove crosses from churches has continued, and officials targeted and imprisoned Christians who spoke out against it, including Pastor Bao Guohua and his wife, Xing Wenxiang. Not even members of state-sponsored churches were safe from persecution.

“It is crucial that the U.S. government not only integrate human rights messaging—including on freedom of religion or belief—across its interactions with China, but also consistently make clear that it opposes Beijing’s overt violations of international human rights standards,” USCIRF said in its report.