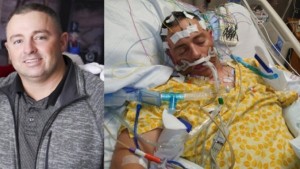 (NaturalHealth365) Las Vegas resident Shane Morgan is now partially paralyzed, blind and unable to walk after receiving the flu shot. The onset of these symptoms occurred just one day after the flu vaccine was administered. He immediately went to the hospital, was placed in ICU and put on a ventilator.

And, yes, the Morgan family is certain that these terrible symptoms were vaccine side effects triggered by the flu shot. In expressing her feelings, Mrs. Morgan said, “it’s the last time anyone in my family will ever get one.”

Shane Morgan was perfectly healthy before receiving the shot. After getting the vaccination, he quickly become a man unable to walk, speak or even breathe on his own.

With family members on their way into town for the holidays, he and his wife Monique had been preparing for guests. Part of their preparation was to get a flu shot. Little did they know about the negative consequences.

Around 36 hours after the couple received their flu vaccines, Shane started to feel sick. Symptoms progressed quickly from there, and he soon reported being unable to feel his arms or legs. After being placed on a ventilator in the hospital, Shane was being treated for symptoms of GBS, or Guillain-Barré syndrome. Sadly, no one told the Morgan family about the possible (unwanted) side effects before receiving the vaccination.

Guillain Barre syndrome involves the body’s own immune system damaging its nerve cells. And, in some cases, GBS can turn deadly.

No surprise here: The Southern Nevada Health District is downplaying the threat of vaccine side effects

The Morgans are convinced it was the flu shot that triggered the disease. Even the U.S. Centers for Disease Control and Prevention (CDC) admits there’s a link between the influenza vaccine and GBS. But, of course, most conventionally-trained medical ‘experts’ will tell you that it’s very rare – just one to two cases per one million vaccinations.

The Southern Nevada Health District says GBS risk is higher in persons who come down with the flu virus. Yet, even in light of this story, health officials say the flu shot saves lives, and this story shouldn’t deter anyone from getting it.

But, you can be sure of one thing: the Morgans don’t want to hear about the ‘value’ of the flu shot. We can only hope that someone will show them this article for safer solutions. The truth is: there are many ways to keep the immune system strong and avoid flu symptoms – without the need for toxic drugs.

It should be noted that one of the possible flu vaccine side effects is getting the flu. The flu vaccine is not 100% effective; far from it. In fact, in some years it has gone as low as 10% effective. This is because viruses change and evolve over time. And, let’s not forget the many toxic ingredients inside every shot – which actually weakens the immune system.

Some of the worst ingredients inside include, influenza viruses, “preservatives” like thimerosal (mercury – which is neurotoxic), “stabalizers” like, MSG and sucrose plus antibiotics, polysorbate 80 and formaldehyde. (truly a horrible cocktail of toxins.)

As we have said so many times before, the best defense against the flu is keeping the immune system strong year-round. This is accomplished through healthy diet and lifestyle choices. Get enough sleep, take a vitamin C and D3/K2 supplement. Just keep in mind: should you come down with the flu, simply take more vitamin C until symptoms disappear, drink lots of fluids and get plenty of rest.