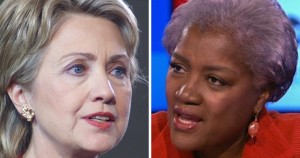 In an op-ed published recently in Politico Magazine, Brazile wrote that while was looking into whether members of the DNC had improperly assisted Clinton to win the nomination over other candidates, she discovered the DNC was struggling financially.

“When I was asked to run the Democratic Party after the Russians hacked our emails, I stumbled onto a shocking truth about the Clinton campaign,” she said.

Brazile claimed Wasserman Schultz, who served as DNC chair from May 2011 until July 2016, had essentially handed over control of the committee and its resources to the Clinton campaign in exchange for a monthly allowance to cover other costs.

“Debbie was not a good manager. She hadn’t been very interested in controlling the party — she let Clinton’s headquarters in Brooklyn do as it desired, so she didn’t have to inform the party officers how bad the situation was,” Brazile wrote.

Brazile said she found a joint fundraising agreement “between the DNC, the Hillary Victory Fund, and Hillary for America.” It was then that she realized the DNC had been working with the Clinton campaign nearly a year before Clinton had secured the nomination.

“The agreement — signed by Amy Dacey, the former CEO of the DNC, and Robby Mook with a copy to Marc Elias — specified that in exchange for raising money and investing in the DNC, Hillary would control the party’s finances, strategy, and all the money raised,” Brazile wrote.

“Her campaign had the right of refusal of who would be the party communications director, and it would make final decisions on all the other staff. The DNC also was required to consult with the campaign about all other staffing, budgeting, data, analytics, and mailings,” she added.

Brazile blamed former President Barack Obama and Obama and Wasserman Schultz for placing the DNC in such a depleted financial position that essentially forced them to rely on money from the Clinton campaign. As a result, this created an atmosphere that greatly favored Clinton over other Democrat candidates, most notably Vermont Independent Sen. Bernie Sanders, according to Brazile.

Brazile said Obama “left the party $24 million in debt.” She believes Wasserman Schultz exacerbated the problem by refusing to reduce costs during non-election years to help alleviate the financial strain.

“The party chair usually shrinks the staff between presidential election campaigns, but Debbie had chosen not to do that,” Brazile said. She added: “She had stuck lots of consultants on the DNC payroll, and Obama’s consultants were being financed by the DNC, too.”

Brazile said Democrats lost the 2016 presidential election because there was a major lack of grassroots enthusiasm for Clinton. Brazile claimed she called Sanders weeks before the election and told him she didn’t trust the polls, most of which had Clinton defeating then-Republican nominee Donald Trump.

“I had to be frank with him. I did not trust the polls, I said,” suggesting she feared Clinton would lose the election. “I told him I had visited states around the country and I found a lack of enthusiasm for her everywhere,” she added.