Founder of the Weather Channel, “There is No Global Warming” 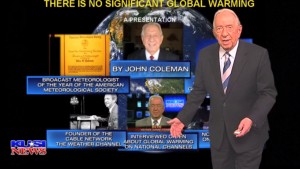 John Coleman is an award-winning meteorologist, Founder of the Weather Channel nearing his 80s who is coming forward to thoughtfully debunk what he sees as the fraud of Global Warming, the bad science being funded to the tune of over $4.2 billion in US Tax Dollars per year, carbon trading (“cap and trade”), etc.

He says, “I love this planet Earth. I’ve been a citizen of this planet Earth now for darn near 80 years and it’s all I’ve got! If I thought that we, mankind were damaging this beautiful little sphere, this blue marble on which we live, I would be terrified and give every ounce of energy I had to stop what we were doing. But I have studied the issues of so-called ‘Global Warming’ or now, they call it ‘Climate Change’ since the warming has stopped; I have studied the issues carefully and completely, as a good scientist and have reached an absolute firm conclusion that there is no Global Warming.”

He insists, in fact that the Earth is in a period of slight cooling, as part of the ongoing cyclic interglacial periods between ice ages.

There’s no question that petrochemical toxicity in the environment is deleterious and undesirable but given the Earth’s long history of cyclical ice ages and interglacial periods, anthropogenic Global Warming is an expensive scam invented by the psychopaths who want to make derivatives out of this lie and trade them like so many other
fictions available on the Stock Exchanges of the world.