“The documentary concludes rightly with a lot of support that the manuscripts are very old, and they are well done, they’re reliable, they do preserve the original wording of the Greek New Testament,” said Evans, professor of Christian origins at Houston Baptist University. 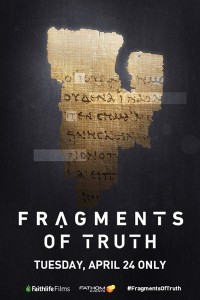 “So when you read the New Testament today, you read the Gospels, you know that what you’re reading is in fact what Matthew wrote, or Mark, or Luke or John,” Evans told BP. “And it’s not something that’s been heavily edited or revised at a later time.”

Showing April 24 in 750 theaters for one night only, Fragments of Truth shows viewers the earliest New Testament manuscripts and offers insight from 20 top scholars encompassing several specialties, including conservationists and curators from museums, libraries and faculties from around the world.

The Fathom Events and Faithlife Films project ends with an interview featuring Evans and documentary director Reuben Evans (who are not related).

“The challenges to the reliability of the Gospels have never been greater,” the director said in a Fathom Events press release. “But when we heard about the latest research Dr. Craig Evans published, we knew this was a story that we had to tell.”

The documentary examines physical evidence without being theological, Evans said, but can support theologians in their examination of biblical inerrancy and inspiration, as well as Christians in their faith.

“You can show by accumulating all of the evidence that we have every reason to believe the text of the Bible today is the text originally written in the first century,” Evans said. “Of course, that lays a very firm foundation for the theologian who wants to talk about inspiration and inerrancy and infallibility. Our findings support the theologian in doing that.

“The results of the investigation should be encouraging to any Christian who takes Scripture seriously and sees it as authoritative and inspired.”

Also lending expertise to the documentary is Dan Wallace, founder of The Center for the Study of New Testament Manuscripts, senior research professor of New Testament studies at Dallas Theological Seminary and author of the widely used “Greek Grammar Beyond the Basics.”

John Rhys-Davies, who played excavator Sallah in the Indiana Jones films, narrates Fragments of Truth, relaying explanations and definitions of technical jargon along the way to make the film relatable to laypersons and experts alike.

“Anybody who can read a newspaper, any high school graduate, can see this movie and understand it, and come away enriched in knowledge and come away very reassured that the biblical manuscripts are accurate and reliable,” Evans said. “A lot of the sensational stuff that we’ve been hearing about for years, about the text being changed or manipulated or something like that, I hope [viewers] go away and realize that’s just a lot of baloney. There is nothing behind that. It’s fiction. It doesn’t represent the evidence at all.”

One fact not often noted about the earliest available manuscripts, Evans said, is that they were copied by pagan professional scribes, not amateur Christians interested in changing the original text to support personal theologies.

“They weren’t Christians so they don’t particularly have any theological bias,” Evans said of the scribes. “They’re professional scribes who are paid to copy the text accurately, word for word, letter by letter, line by line.”

Ticket information for the film, showing at 7 p.m. local time in all venues, is available at fathomevents.com/events/fragments-of-truth. A DVD release is unconfirmed.