From “FOOTPRINTS” to “Forgotten Heroes”

“The steps of a good man are ordered by the Lord: and he delighteth in his way. Though he fall, he shall not be utterly cast down: for the Lord upholdeth him with his hand.” Psalm 37:23

Inspiring, uplifting faith-based Christian entertainment is both a vision and a personal passion of Whitinsville (MA) resident Jim Huggins. Recent successes include a Red Carpet World Premiere at the 6th annual Pan Pacific Film Festival in Hollywood this July in honor of “FOOTPRINTS – ANGELS ARE REAL.  SOME EVEN HAVE FUR.”, a film Huggins directed, co-wrote and co-produced with Russ Dougherty. Winning this award was highly unusual, since the film’s production was accomplished using a cast and crew of 540 filming in RI and MA, but with virtually no money in contrast to the millions generally spent on such projects.  Despite being unable to raise the necessary funds, the producers opted instead to proceed on faith, an appropriate decision since “FOOTPRINTS” was inspired by the true events of Huggins’ own journey of faith.  Prior to the World Premiere, their efforts had already been recognized by numerous awards including the coveted Dove Award for family entertainment and a “4+ Exemplary” rating from MovieGuide.org in Hollywood.

[Long-time readers of The Good News Today may remember an article in the December 2010 issue, available in our website archives, which told behind-the-scenes information about the way “FOOTPRINTS” was filmed, how its story came to be told, and about a complimentary Screening to be held in January 2011 at Woonsocket’s Stadium Theatre.]

The age-old problem of suffering and loss is, for some Christians, often explained away as attacks from “The Old Boy”, i e. the devil or Satan. Viewed by itself, this approach, while rightly taking into account the real possibility of spiritual warfare, may fail to acknowledge that, according to Scripture, it is God who controls all things – He is sovereign.  This means that He rules over all things, both good and bad.  “Who has spoken and it came to pass, unless the Lord has commanded it? Is it not from the mouth of the most high that both good and bad come?” (Lamentations 3:37-38).  Especially during times of trial we are tempted to believe that the bad things don’t come from God.  But, they do.

Even more difficult to acknowledge for many is that God orchestrates all events.  He is providential.  It is possible to believe that God is in control of everything, yet not believe that He actively involves Himself in the things that happen to us.  But this misses the concept of God’s providence.  Read what Hannah told the Lord after dropping off her only son, the one God had finally given to her, but whom she had promised to give back. The day for giving up her beloved had at last arrived, and Hannah worshiped the Lord saying, “The Lord makes poor and makes rich; He brings low and he exalts.  He raises up the poor from the dust; He lifts the needy from the ash heap to make them sit with princes and inherit a seat of honor.  For the pillars of the earth are the Lord’s, and on them He has set the world. (I Samuel 2:7-8).

Particularly painful even for strong and devoted Christians to acknowledge is that God is good and He does good.  Many of us can weep with those who weep while saying “God is in control”, but it is another thing entirely to look at what has happened and say “It is good”.  Yet Scripture instructs, “You are good and do good; teach me your statutes.” (Psalm 119:68)  We cannot read this passage and expect that because God does good, we will then love everything He does.  Unlike Him, we do not possess an omniscient viewpoint.  Unlike Him, we cannot see the end from the beginning.

At age of five, Jim Huggins lost his adored mother, and was promptly abandoned by his father.  Without explanation his father, while keeping his older son with him, took Jim to live with his grandparents, who ran an orphanage. It is doubtful whether Jim appreciated or gave much thought to how God, through suffering, was shaping him into a man He could use.  But even then, God was weaving together the bright and dark threads that would one day comprise the fascinating tapestry that already depicts a productive life full of gratitude.  In the process of working out his own salvation, Jim and an abused rescue dog, who came into each other’s lives at precisely the right time, found love and healing for themselves while learning how to bless others.

Since producing the movie FOOTPRINTS in 2011, Huggins has written “Memoirs of an Angel”, a book containing heartwarming vignettes about his evangelistic work with Cadie, the German Shepherd dog he rescued, and whose life he chronicled in “FOOTPRINTS”.  Both Cadie and Huggins had suffered past lives marked by feeling unloved, unwanted, and lonely. Both dog and man had seemingly given up after losing everything that mattered to them, but when God placed the two of them together, a certain synergism emerged enabling them to forge a new purpose. “…weeping may endure for a night, but joy cometh in the morning.” (Psalm 30:5). “Memoirs of an Angel” relates their numerous visits to schools and nursing homes, highlighted by Cadie’s exceptional gift for sensing in a miraculous way specific needs of children and patients, and assisting them in ways that human beings could not.

Telling these stories has brought acclaim to Huggins in his chosen field of teaching and sharing the Gospel in books and films, thus engaging the culture rather than leaving it for others to shape.  Since 2006, when his career life took a decided turn, he has acquired significant experience in theater, commercial campaigns, voiceovers, print work, and feature film.  A stage, TV, and film actor, he has directed, produced, and written books published by OakTara Publishers in alliance with New Shepherd Films.  As founder and CEO of New Shepherd Films, established in 2009, with offices in Fall River and Whitinsville, MA, Huggins is continuing his dedication to providing wholesome, faith-based Christian entertainment for families. 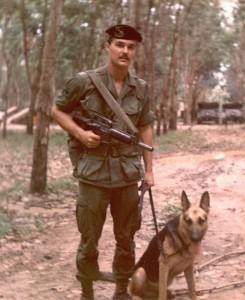 The newest project in the pipeline is another film, “Forgotten Heroes – Everyone Deserves to Come Home”. A true story set in 1967, when the Vietnam War was being fought both here and abroad, it concerns a young man with character who chose to leave behind all that he knew and loved, to serve at a time when honor and virtue were scorned by many.  A German Shepherd military working dog named Duke became his improbable teacher from whom he learned about loyalty, service, and sacrifice. From Duke he found out what it meant to trust another with his life as well as to give it for another without hesitation. He trusted Duke to protect and guard him, and to stand by his side no matter what. Like “FOOTPRINTS”, “Forgotten Heroes” was inspired by true events.   A compassionate story told in a compelling way, it shows the unbreakable bond formed between a dog and a man – in this case, a Military Working Dog Handler, the only one to receive the Medal of Honor in Vietnam.  It also provides an education for the public about the sacrifice of the 4,000 dogs sent to Vietnam, only 250 of which came home.

Huggins, both a 20-year U.S. Air Force veteran and a lover of German Shepherds, enlisted the help of Michael Lemish, a fellow lifetime member of the Vietnam Dog Handler Association (VDHA), to become a key member of the writing team for “Forgotten Heroes”.  Until recently a long-time historian for the VDHA, Lemish is a foremost authority on military working dogs; his involvement insures historical accuracy for the film.  Now, after two years of researching and completing the script, Huggins says “Forgotten Heroes” is on the cusp of development.

At this juncture, in order to move forward decently and in order, “Forgotten Heroes” needs crucial financial help from all those who care about the future of family, faith-based entertainment and want to be salt and light to the culture rather than abandoning it.  To this end, during September and October, New Shepherd Films will be running a “crowdfunding” campaign on IndieGoGo, one of the world’s leading sites for promoting projects and finding funding to assist in their development and production. Huggins and his fellow filmmakers, Russ Dougherty (Director of Photography and Writer), and Dr. Leslee Huggins (Jim’s wife, mother of Emma, David, and Samuel, a dual-specialist in pediatric dentistry, and Associate Producer and Music Supervisor for New Shepherd Films) have been working tirelessly thus far. But now they need to find others who recognize the enormous need for financially supporting good entertainment which positively impacts our culture and influences our society.

As a means of thanking supporters who desire to share in that opportunity, New Shepherd Films is offering many significant gifts/incentives including, depending on the level of giving, advanced autographed copies of the “Forgotten Heroes” book and DVD copies of the movie before their release to the public, posters, and even opportunities to be in the film or attend its planned premiere event in Los Angeles, probably in late 2016!  Many other faith-based initiatives have succeeded in raising necessary funds through “crowdfunding”, and Huggins’ team members are praying that God will help them reach the hundreds of thousands of individuals needed in order to attain their goal. Interested people may e-mail info@newshepherdfilms.com, call (508)536-3188, or visit the following websites for additional information about how to participate:

Furthermore, Dr. Huggins, who holds a B. S. in Mathematics, an M. S. in Engineering, and a Ph.D. in Engineering Management, is now making himself available to share his experiences and insights.  He will speak to businesses, civic groups, and at community events, as well as arrange for people to host family movie nights as an outreach to the community.

Recently awarded an honorary DDiv for his efforts at Creative Evangelism and ordained as a pastor, he will gladly give encouragement to Youth groups (a recurrent theme: “Just because you had a bad past doesn’t mean you can’t have a great future!” – a good intro to a discussion of Jeremiah 29:11), speak to Men’s groups, and address Sunday morning congregations.  He uses Biblical/Scriptural themes within the stories he tells, while expressing the need for Christians to engage our culture through the medium of faith-based entertainment. A New Shepherd Film brochure reads, “A church that conforms to the world will never be able to transform the world to the church.”

“A man’s heart deviseth his way: but the Lord directeth his steps.” Proverbs 16:9