by Jonathan Benson, staff writer
(NaturalNews) The same company responsible for building the flawed Fukushima Daiichi nuclear power reactor in Japan, which failed back in 2011 following a historic earthquake and tsunami, also built a nuclear facility in Shoreham, New York, that, unbeknownst to the general public, is also highly vulnerable to a catastrophic earthquake.

According to investigative journalist Greg Palast, this plant is inherently flawed, just like Fukushima was, having been approved for construction based on a phony seismic qualification, or SQ. A nuclear plant’s SQ indicates its likelihood of undergoing meltdowns in the event that it is shaken during an earthquake or other seismic event. 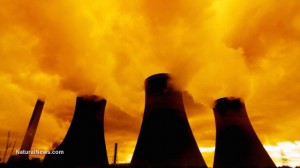 To make a long story short, two senior nuclear plant engineers who worked at the facility confessed to Palast that the Shoreham Nuclear Power Plant failed to meet the Seismic I standards required by law, which means it is prone to a systemic failure — or what one of the senior engineers described to Balast as the potential to “completely and utterly fail.”

“The plant [is] riddled with problems that, no way on earth, could stand an earthquake,” wrote the senior scientist in a handwritten log. “The team of engineers sent in to inspect found that most of these components could ‘completely and utterly fail’ during an earthquake.”

On the other side of the country, the fate of the Diablo Canyon Power Plant positioned along California’s Central Coast is equally as turbid. Like Shoreham, this facility is prone to catastrophic failure in the event of an earthquake, and was also greased through the regulatory system based on lies and misinformation.

A 2011 hearing held by the California Energy Commission revealed that the plant’s stability in the event of an earthquake is unknown. What is known, however, is that the backup cooling system for preventing a full-scale meltdown is exactly the same as the one at Fukushima, which means it is just as vulnerable.

Recognizing that followup studies need to be conducted on this questionable plant before a renewal operating license is granted — the plant’s operator, knowing the problems at the plant, still requested a 20-year operating extension — then California State Senator Sam Blakeslee urged the company to withdraw its renewal application and conduct further seismic testing.

But this has not occurred, and the Nuclear Regulatory Commission (NRC) is willfully violating the law by not enforcing the appropriate safety rules set out for the plant.

“According to [Michael Peck, who worked as the lead on-site inspector at Diablo Canyon for five years], PG&E [the operator of the plant] research in 2011 determined that any of three nearby faults — the Shoreline, Los Osos and San Luis Bay — is capable of producing significantly more ground motion during an earthquake than was accounted for in the design of important plant equipment.”

Getting back to the Shoreline plant, the company that built both it and the Fukushima plant has been tasked by the Obama Administration with building four additional nuclear plants in the U.S. Billions of dollars in taxpayer-funded subsidies have been awarded to Shaw Construction, formerly Stone & Webster, to build more structurally flawed plants that could unleash a nuclear holocaust in America.

“The NRC is using obviously-faulty models to pretend that the ancient, crumbling reactors are safe.”