(WNS)–In 1874, a group of Chinese and Western language scholars commissioned by the American Bible Society completed the first translation of the Bible into colloquial Chinese, allowing everyday Chinese people to read and understand the Word of God. Samuel Isaac Joseph Schereschewsky, a Jewish convert and Episcopal bishop of Shanghai, worked for 11 years to transform the elegance of the Old Testament Hebrew into Chinese; and for the next 40 years, the text became the standard Bible for the Chinese.

Yet today, most Chinese Christians have never read this Jingwei Version Bible or even know of its existence, as few copies survived the missionary martyrdoms and Bible burnings in the early 20th century and the Cultural Revolution in the ’70s. In its place, the 1919 Chinese Union Version gained popularity and is now the only Bible version the Chinese government allows, rolling hot off the presses of the government-controlled Amity Press in Nanjing, China. 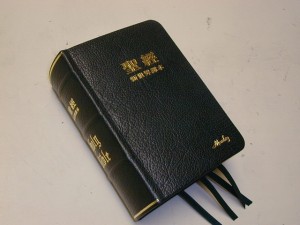 The Union Bible, used by the tens of millions of Christians in China, is a literal translation of the English Revised text, and also relies heavily on the earlier Jingwei Bible with about 80 percent of the text remaining the same.

While some take issue that the Union Bible is not translated from the original Greek and Hebrew, a bigger problem is that the government has control over revisions and corrections in new editions of the Bible.

For the past few years, Jared Brown (name changed for security purposes) and a fellow American missionary have scoured libraries, museums, even antique bookstores around Asia and the United States for portions of copies of the Jingwei Bible. With help from experts on Schereschewsky, they found microfilms of the text, footnotes by the translators, and later revisions, which Brown pieced together to recreate the original text of the Jingwei Bible. In January, he printed 5,500 copies, keeping the original language but changing the characters from traditional to simplified form for use inside China.

Brown’s interest in the Jingwei stems from his views of textual criticism—the Jingwei is based on the Majority Text, meaning it takes into consideration all available biblical manuscripts, while the Union Bible places more weight on certain biblical manuscripts that are believed to be more reliable. Bible scholars have long disagreed on which method is more accurate, yet Brown believes the Jingwei Bible should interest those on either side of the debate for its historicity as the first Mandarin Bible translation, its scholarship in translation, and its independence from government interference.

“The main thing that the Union Bible was trying to push was ‘Let’s try to be more literal, let’s see if we can get more of the English mindset,’” Brown said. “There’s no doubt, the one that we got right here is much more Chinese.”

The Jingwei has a more Chinese rhythm in its verses, and without the pressure of conforming to English phrases, it uses Chinese four-character idioms called chengyu to express the original sentiment. While the Jingwei uses older words (think the “thees” and “thous” of KJV), local pastors find the translation more beautiful and clear. For instance Joshua 1:9 says “be strong and courageous,” which the Union tries to translate directly from the English to a phrase that means something closer to “strengthen willpower.” The Jingwei uses a chengyu that has the exact same meaning as the original.

The Communist government also makes changes to the Union translation at its discretion. For instance, certain biblical terms used by Hong Xiuquan, the leader of the 1850 Taiping Rebellion who claimed to be the younger brother of Jesus, were taken out from the Union Bible. The government feared Christians reading terms like “chosen people” would follow in Hong’s footsteps in starting an uprising that killed about 25 million people. Brown has also found editions of the Union Bible that take out references to baptisms: “The fact that the government is in charge of all revision and all corrections and all printing—that’s a huge problem because it was never given to the government. The Lord makes it really clear as far as who is responsible.”

One of the biggest issues Chinese Christians may have in accepting the Jingwei is that it uses the term Tianzhu for God, a name typically used by Catholics. Protestants have long argued about the best name for God, some using Shangdi while others use Shen. Shangdi is the name of a supreme god in China’s traditional religion, and some missionaries used it to imply that China had an idea of a monotheistic god but forgot who he was. Others dislike the term because it made God just one of many of China’s gods. On the other hand Shen was a broader term for god (with a little g). The translators of the Jingwei opted for Tianzhu, which means “heaven and earth’s keeper.” While Christians who hear the term may think of Catholicism, Brown pointed out that in every other culture Catholics and Protestants used the same name for God without any problems.

Beijing pastor Jeremy Jin first heard of the Jingwei two years ago through Brown, and in reading the Bible found that although it took time to adjust—he had spent years preaching and memorizing verses from the Union Bible—the literary style flowed better and the meaning was clearer. In March, Jin started using the Jingwei at his 20-person house church, one of 10 pastors now using it in their churches.

The printing of any version of the Bible outside of government control is illegal in China, so Brown is spreading the word through other missionaries and local church pastors. By summertime, he hopes to create a Jingwei Bible app, which would make it impossible for the government to stop the spread of the Bible.