“Galaxy Buck: Mission to Sector 9” to Blast Off October 2015 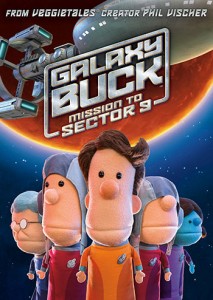 In 1990, 24-year-old computer animator Phil Vischer sat down to create a group of characters that could teach Christian values to kids in a delightfully different way and so a tomato named Bob and a cucumber named Larry were born. “VeggieTales®” revolutionized Christian filmmaking, selling more than 50 million videos and placing Vischer’s faith-filled stories in one out of every three American households with young children. Vischer continues to pursue innovative ways to integrate faith and storytelling through his company Jellyfish Labs.

Featuring Vischer’s lovable and familiar characters from the bestselling video series, “Buck Denver Asks® … What’s in the Bible?,” “Mission to Sector 9” shares their adventure as they take the good news about God’s love to the far reaches of the galaxy.

“The purpose of Galaxy Buck is to teach kids what walking with Jesus actually looks like,” said Vischer. “‘What’s In The Bible?’ taught the tenets of our faith, now we’re going to show kids faith in action.”

“Galaxy Buck” follows the journey of Buck Denver, an employee of The Galactic Mission Board, which exists to send explorers to “boldly go where no man has gone before,” according to Vischer. They are tasked with sharing the love of God with everyone, including those in the far corners of the universe. When Buck and his friends find themselves in the midst of an unexpected and important mission, they learn valuable lessons about their purpose in God’s big plan. 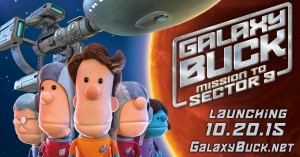 The series features new and innovative filmmaking techniques with miniature sets hand-carved primarily by Vischer, “Galaxy Buck” will combine CGI animation, stop-motion sets that add an extra dimension of realism, and live-action for a visually captivating experience for viewers.

The “Galaxy Buck” series is produced by Vischer’s studio Jellyfish Labs in partnership with Creative Trust, which previously collaborated on the successful “What’s in the Bible?” series. The first showing of “Galaxy Buck” debuted via a special simulcast on September 17; in October, the film will debut via streaming on JellyTelly.com and on DVD through retail stores in partnership with Capitol Christian Distribution.

For more information and a sneak peek of the series, visit www.GalaxyBuck.net.