God created a massive dust storm to deliver Islamic converts from the militants who hunted them, according to a recent report. Bibles For Mideast claims the organization had just finished a mass baptism for 50 newly saved Christians when militants surrounded their bus and fired shots.

“About 50 people including baptism candidates attend the service. We all went by a bus. After the baptism service and prayers, we all entered the bus to return back in our house church for the worship service and the Lord’s Supper. The bus was moved. Suddenly some militants reached behind us by three or more cars and started shooting with guns toward us,” a new believer said, according to the report. 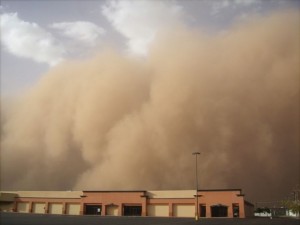 The new converts and their leaders feared the worst. That’s when the wind started to pick up, and dust began to swirl around them.  “Suddenly we saw a giant dust storm formed behind our bus. At first we all afraid of seeing the dust storm. We thought we may not be able to go beyond and will be held by the militants. But praise the Lord! Praise the Lord again and again! We all felt that the Lord Jesus Christ appeared upon the dust storm as a Mighty and Wonderful Man showing His protecting and lovely hands toward us with a sweet smile. Jesus saved us. He Himself blocked the road of militants in the form of a dust storm,” the report reads.

According to their website, Bibles For Mideast is an underground ministry to distribute the Word of God to people in need.