(WNS)–Six Republican presidential hopefuls descended on a north Texas megachurch Oct. 18 to appeal for support from what should be a dependable voting bloc. But during the event, hosted by Prestonwood Baptist Church and the Faith and Freedom Coalition, the ability of evangelicals to affect political change was as much on stage as the candidates.

More than a decade ago, conservative Christians dominated American politics. Today, it’s a different era, and Bible-believing Christians appear to have lost their powers of political persuasion. The number of Americans identifying as Christian is on the decline: A Pew Research Center study released in May shows an 8 percent drop over the last seven years among U.S. adults identifying as Christian. Meanwhile, the same study found the number of U.S. adults who do not identify with any organized religion is on the upswing.

According to Jack Graham, senior pastor of the 40,000-member church hosting yesterday’s event, this changing religious landscape makes it ever more important for Christians to educate themselves on candidates’ positions and align behind those who will lead according to biblical principles.

“In the last presidential election, many evangelical Christians did not vote,” Graham said. “I’ve heard all kinds of numbers, maybe up to 8 million.” But he said he sensed Christians now are “fired up” and “ready to do a lot better” in 2016. 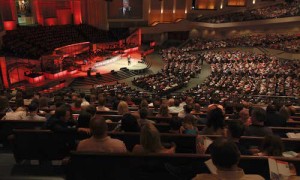 At the carefully choreographed North Texas Presidential Forum, more than 6,000 attendees and 10,000 online viewers watched candidates speak for 10 minutes each about their faith then field questions from Graham on a range of topics. The pastor touched on Middle East policy, entitlements, the fiscal gap, abortion, religious liberty, and national security. At no point did candidates appear together on stage. Republican front-runner Donald Trump was notably absent, as were Democratic Party favorites Hillary Clinton and Bernie Sanders, all of whom declined organizers’ invitations to participate

Carly Fiorina was first out of the gate, earning strong applause from the crowd for repeatedly advocating the election of a leader who would “restore the character of this nation.” The former Hewlett-Packard CEO also shared very personal reasons for her support for pro-life policies—from watching the harmful emotional, physical, and spiritual effects abortion had on a friend, to her own mother-in-law being told by doctors she should abort Fiorina’s now husband.

Sen. Ted Cruz, a Southern Baptist and Texan, held the home court advantage, as evidenced by the six standing ovations the crowd gave him. Cruz played to the audience, citing his “pastor’s kid” status and reminding attendees of his often oppositional stance to Congress, listing Obamacare, “illegal amnesty,” and Planned Parenthood as examples. He also invoked Trump, suggesting the front-runner is asking the most important question in the campaign.

Rivaling Cruz in standing ovations was former Sen. Rick Santorum, R-Pa., who called himself an “evangelical Catholic” and touted his track record of promoting right-to-life issues, battling the Affordable Care Act, authoring sanctions against Iran, implementing health savings accounts, and most recently producing Christian films. He compared himself to Ronald Reagan, saying just as Reagan cemented his position as an opponent to communism before assuming the presidency, Santorum is making himself known as an enemy of radical Islam.

Former Arkansas Gov. Mike Huckabee also found himself in friendly territory on Sunday: Prestonwood’s Graham endorsed him for president in 2008. More than any other candidate, Huckabee focused on foreign policy.

“I’m not unfamiliar with the region,” he said of the Middle East. “But I’m also very familiar with the fact that the only ally we have in that region that’s reliable is Israel. And we have put more pressure on Israel to stop building bedrooms in Judea and Samaria than we put on Iran to stop building nuclear devices that will one day be aimed at us, and that is an irrational act of madmen.”

Retired neurosurgeon Ben Carson, a Seventh-Day Adventist, shared his story of faith, talking candidly about how his failed attempt as a young man to stab someone in a fit of anger ultimately caused him to question his life’s purpose and drew him to the Bible. He also laughed about how, after 15,000 surgeries, he was looking forward to retirement, and then “the National Prayer Breakfast happened.” That event catapulted him to national prominence for taking President Barack Obama to task while sharing a stage with him.

Former Florida Gov. Jeb Bush, a practicing Roman Catholic for two decades, identified the church concept of subsidiarity as influential in his political philosophy, which he described as solving problems “from the bottom up”—first in families, then community, then government, starting at the local level.

“We’ve made it harder for families to make decisions for themselves,” Bush said. “Our communities are hollowed out in many places. Institutions that used to keep us together no longer have the same value, and our government is getting bigger and bigger and bigger, particularly in Washington, D.C.”

Bush highlighted his efforts as governor to “shift power from government back to the family,” including reducing the size of the state’s government through career civil service reform and providing statewide voucher programs for school choice.

Concluding the event, Graham encouraged his congregation to take an active role in the political process: “An educated voter will make the right decision, and Christian voters need to be informed.”