Gospel for Asia sued for fraud

GFA has claimed that hundreds of millions it has received in donations have gone to help the poor and preach the gospel. The lawsuit, though, alleges that ministry leaders were “covertly diverting the money to a multi-million dollar personal empire.”

The lawsuit, filed by the Stanley Law Group on behalf of Matthew and Jennifer Dickson of Rogers, Ark., asks a U.S. District Court to order money returned to unwitting donors whose well-intentioned contributions were, according to the lawsuit, misappropriated.

The lawsuit accuses GFA founder and leader K.P. Yohannan of funneling millions of dollars into a variety of for-profit businesses and a lavish 350-acre compound that is home to GFA’s sprawling headquarters in Wills Point, Texas. 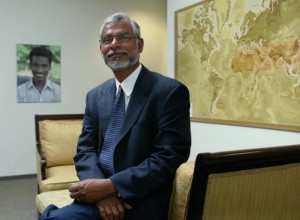 GFA promised donors their contributions would be used for specific purposes the donors themselves selected, the lawsuit notes, such as buying blankets or camels for poor families or motorbikes for missionaries, especially in regions of South Asia, where the ministry concentrates most of its work. GFA did not keep such promises, the lawsuit contends.

“K.P. Yohannan and his Gospel for Asia inner circle have been exploiting the goodwill and generosity of devout Christians around the country for years,” said the plaintiffs’ lead attorney Marc R. Stanley in a prepared statement. “Gospel for Asia should return all the money it’s taken from donors who thought they were contributing to charity.”

Last year, the Evangelical Council for Financial Accountability (ECFA) booted GFA from its membership after an investigation found the ministry did not meet ECFA’s guidelines.

The ECFA found GFA hoarded as much as $259 million during some months rather than spending the donated funds on church-planting, missionary work, or charitable relief for the poor.

Former GFA board member Gayle Erwin resigned his board position on Oct. 3, 2015, the day after the ECFA revoked GFA’s membership.

Erwin recently said he grew suspicious when Yohannan became reluctant to discuss details of ministry practices with him and other board members.

“There came a time when he stopped talking and everything became a veil of darkness,” Erwin said. “And for that I confronted him a lot.” Yohannan eventually lashed out at Erwin, according to the former board member. “I was pretty much insulted in every way possible. … In talking with others, I have found out that’s how he leads. He is a bit of a bully.”

The class-action lawsuit applies to tens of thousands of donors who donated a combined hundreds of millions of dollars to GFA, said attorney Martin Woodward of the Stanley Law Group, who added that the lawsuit aims to hold GFA accountable: “When a charitable organization promises donors that all contributions will be spent only as the donors direct, that organization is obligated to keep its word. Gospel for Asia made all sorts of explicit guarantees to donors and then broke its promises. This case is about righting those wrongs.”