Government ignores the truth: Zika spraying is neurotoxic and ineffective 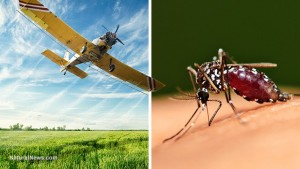 (NaturalHealth365) In the wake of news reports of mosquito-borne transmission of the Zika virus occurring in Miami, health authorities have been spraying areas of the city with the insecticide called naled.  In the South Park section of San Diego, California, officials are spraying with Pyrenone 25-5, in response to the same perceived threat. And, in New York City, authorities are trying prevent the Zika virus from spreading with a combination of DUET and Anvil 10+10.

Is this an example of responsible city officials taking steps to control disease by reducing the mosquito population – as some would have you believe?

The surprising truth about the Zika virus exposed

Hysteria over the Zika virus represents another example of a scenario that is becoming all too common – one in which chemical companies and government officials join forces to profit on fear by creating mass hysteria over relatively innocuous viruses.

Leading entomologists and natural health advocates are coming forward to warn the public – toxic organophosphate insecticides like Naled are not only ineffective but potentially devastating to humans and the environment, and are far more dangerous than the diseases they are claimed to combat.

Naled is a toxic and carcinogenic “witches’ brew”

Naled, sold under the trade names Bromex, Dibrom and Fly Killer-D, is neurotoxic to humans and animals. Sprayed in fine aerosol droplets, it can easily be blown away from application sites by the wind – in some cases, it can drift for distances up to half a mile from the target site.

In the presence of sunlight naled degrades to the toxic chemical dichlorvos, which causes genetic mutations – the reason that the E.U., Canada and Japan have already restricted or banned it from agricultural use.  In humans, exposure to naled can cause difficulty breathing, nausea, vomiting, excessive sweating and blurred vision.  Severe instances of naled poisoning can cause tremors, seizures, coma and death from respiratory failure or cardiac arrest.

In addition, naled has also been linked with leukemia, as well as thyroid, breast and ovarian cancers.

And the harm from drifting naled spray can be disastrous for our environment as well. Sadhu Govardhan, a leading Puerto Rican agricultural consultant, warns that naled is highly toxic to fish, birds, and beneficial pollinating insects, especially bees. Because it interferes with photosynthesis, naled also damages plant life.

Despite what the manufacturers would have you believe, naled is not an effective way to prevent death or illness associated with insect-borne disease.  Leading Kenyon entomologist Dino Martins, Ph.D., is very clear on this point. Speaking to The Guardian, Martins said that although spraying pesticides can reduce numbers of adult mosquitoes that transmit the Zika virus, spraying it won’t solve the epidemic.

Martins points to the difficulty of targeting and hitting flying adult mosquitoes with ground or aerial spraying, and notes that sprays can’t reach into small enclosed areas and covered structures where mosquitoes may hide. Cornell University professor David Pimental agrees, saying that when used against flying adult mosquitoes, less than 0.00001 percent of pesticides ever reach their intended target – a tragic statistic.

In addition, spraying – when it manages to actually contact mosquitoes – kills only adults, not larva.

According to a study conducted by the New York Department of Health, naled, while achieving short-term reductions in mosquito population, actually caused the population to increase a staggering 15-fold over 11 years of spraying.

Mosquitoes’ short lifespans make it possible for them to mutate quickly, allowing them to rapidly become resistant to pesticides such as naled.  Simultaneously, naled kills off predator species that would ordinarily control mosquito population – and it takes much longer for predator species to replenish themselves than for mosquitoes.

And spraying kills off “sympatric species” – similar species of mosquitoes that would otherwise be competing with them.

What should we really do about the Zika virus?

The Zika virus, transmitted by the Aedes aegypti mosquito, has been declared a public health emergency by the WHO. The organization has linked the disease to a birth defect, microcephaly – unusually small heads with incomplete brain development – in infants.

But the link is contested by many doctors’ organizations, including Medicos de Pueblos Fumigados in Argentina. In a terrible irony, it turns out that another insecticide, pyriproxyfen, may be the cause.

According to the CDC, four out of five people infected with the Zika virus don’t even show symptoms. The other 20 percent may experience a week of mild “flu-like” symptoms – fever and joint pain, along with a rash and conjunctivitis.  Most recover fully and are immune to the virus in the future.

Govardhan says that in the search for profits, the pharmaceutical/biotech industry regularly spreads rumors of new, extremely dangerous viruses. The media then publishes reports of isolated cases, helping to create mass hysteria. Of course, if you are pregnant, you should discuss any travel plans with a trusted healthcare provider.

Natural solutions are our best hope for mosquito control

It turns out that Mother Nature has allowed for an amazing variety of natural mosquito predators – dragonflies, ladybugs, lacewings, minnows, frogs, bluegill, bats and swallows all feast on them, with swallows capable of consuming their body weight in mosquitoes daily and bats demolishing 1,200 of the pests per hour.

But agrochemicals and insecticides are currently diminishing the bird and bat population, causing the help we could get from these beneficial species to be greatly reduced.

Protecting and encouraging beneficial species is paramount – and we can do it by avoiding the use of toxic sprays.  Other natural methods of mosquito control include removal strategies of standing water, use of the biological larvicide bacillus thuringiensis israelensis, and use of mosquito egg pherome traps, in which mosquitoes are trapped by the pherome and then drowned.

Bottom line: Blasting the population with toxic chemicals is a poor solution and we must reject these dangerous ideas.