I’d like to thank everyone for your support at this difficult time, and again express how sorry we are that Daniel Chapter One products are presently unavailable.

The US Government took it upon itself to “broaden coverage” of the Order we have complied with for the past 3 years, and “to enhance the compliance monitoring”, saying it is “necessary to protect the public.” That’s you.

Recently Jim and I appeared in RI Federal Court on the criminal matter; I face several FDA charges of putting unapproved “drugs” on the marketplace. That day also, the Government Prosecutor said prosecution of us is necessary to “protect the public.”

The “SS” wing of the Nazi party stands for “Schultz-staffel”, which means “protection squad.” The protection was not of the people. (Concentration camps were first used to imprison “unfit members of society”, which included “members of minority religions.”)

Regarding Daniel Chapter One, the US Government wrote: “The FTC Order did not achieve its purpose of protecting the public and demonstrate that they (DC1 and Jim Feijo) likely will repeat their fraudulent activities and victimize consumers unless their practices are more significantly curtailed.”   The injunction — the shut-down of Daniel Chapter One — was decided upon based on circumstances including “the degree of consumer harm.” Which is a lie. 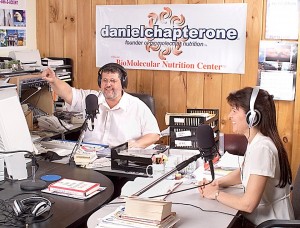 “Consumer harm” is a false theory of the FTC, no doubt propagated by the Pharmaceutical Industry. In the nearly 30 year history of Daniel Chapter One, not one person complained to have been harmed or even misled. Not one. The FTC blocked all our witnesses in court; the people who came to say they had been sent home to die by their doctors and that Daniel Chapter One products helped them were not allowed to speak.

The FTC argued that someone might be harmed one day, and now the US Dept. of Justice argue that we might violate the Order one day, despite the fact that we stopped radio, stopped sending out the BioGuide and Most Simple Guide, stopped sharing testimonials, and sent the Government written letter to all we were ordered to, 3 years ago. We have been in compliance for three years, though it burdened our religious belief to do so, to keep the products available to all who want and need them. But that didn’t satisfy the destructive beast against us, the prince of darkness.

We fear not, and rejoice in the Glory of Yahweh Elohim!

Another, different federal judge will soon be given opportunity to render a righteous decision, as we appeal the present Order.

In the meantime, we have been forced out of business, out of our ministry and our livelihood. Many have asked what they can do to help, and where to send love offerings.

Any donation to “Universitas Christ Centered Homeopathy” will help greatly as we prepare an appeal and for a possible trial, and can be made by calling 1-800-504-5511. If there is no answer, please leave your full name and number, and I will personally call you back.

Checks should be made out to Universitas Christ Centered Homeopathy, and mailed to:

Thank you for your thoughts and prayers. May you be richly blessed with the peace and the joy of our Lord and Savior, Jesus Christ, Yahshua Messiah, who promises “I will bless those who bless you, and I will curse those that curse you.”  It is He, His church, that the Government has come against.