Graduating Before the Angels of God 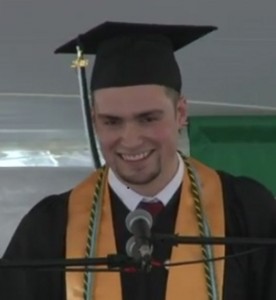 I have only known John Connor Dvorsky for a short time, but I am certainly glad to have met him.  I attended his graduation at Bristol Community College in May.  My wife, an instructor in Spanish at the school, is a regular participant at the graduations.  Connor is engaged to Monica’s niece (Yani) who is studying engineering as is Connor.

Connor was a high school dropout, and struggled for a while dealing with, among other issues, the death of his father.  Yet, he rebounded from these struggles and achieved a 3.99 GPA, and was selected as class valedictorian this year.  What is amazing to me is that his speech, submitted in competition with other outstanding students, was selected in the first place.  What surprised me, and I give great credit to the selection committee at BCC, was that his speech was not edited in any way, and no one on the committee tried to force him to change it.  It most likely would have been edited, or even turned down, at most colleges and universities today.  It is obvious that there are some very honorable people at this community college who made this selection in spite of certain words in his speech.  So what kind of speech given by a valedictorian is sure to be censored in this day and age?

You see, Connor took a big risk, at least as perceived in today’s culture.  He chose to honor Jesus Christ several times in his speech, and gave his testimony of how, through reading the Bible on his own, he came to salvation in Jesus Christ.  He surely did not know what would follow after saying what certainly would be too controversial to say in this politically correct and worldly culture.  Yet, many of his fellow students broke out in loud applause, when he said, “I was created anew by the blood of Jesus Christ at the age of 18.”  Amen to that!  His testimony teaches us that no Christian should ever be ashamed of his faith in Christ, and that perhaps such testimony can help someone come to know the One who can save them from their sins. I appreciate and applaud the courage and wisdom it took to give glory to God in this speech. 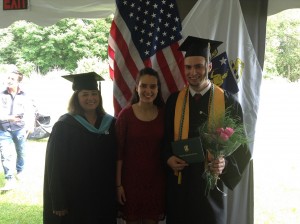 In this day and age, we tend to give credit to all sorts of people for our success.  In this “I did it my way” culture, it is easy for men and women to boast about their accomplishments to the point of forgetting that all that we have, all that we are, was given to us by God.  It is also just as easy to blame God for our tragedies, or our failures.  Connor may have felt a bit of resentment towards God at first, but if so, it did not last forever.  Yes, he was in despair, and he dropped out of school, and surely he asked “why” about a lot of things.  But somehow, he was compelled to pick up a Bible at home and seek answers.  And the word of God was sufficient to introduce him to the Light of the world, who is Jesus.  He later earned his GED, and went on to graduate from BCC with highest honors.

How he came to Christ is evidence of the power of God’s word, and how God chooses to open a sinner’s eyes to the truth.  He can do it through powerful, or not so powerful preaching.  He can do it through someone’s imperfect witness.  God reveals His truth to us in any manner He wishes.  But no matter what vehicle God uses, He does it through the convicting power of His word, and the conviction of the Holy Spirit.  Only God can save us; we cannot save ourselves. God revealed His truth to Connor, and the truth was that Connor, like all of us, needed Christ in His life.  The key thing is that he did not reject the truth that God revealed, which was that he needed the forgiveness and salvation offered through Christ alone.

Hebrews 4:12 says:  “For the word of God is living and active. Sharper than any double-edged sword, it pierces even to dividing soul and spirit, joints and marrow. It is able to judge the thoughts and intentions of the heart. 13Nothing in all creation is hidden from God’s sight; everything is uncovered and exposed before the eyes of Him to whom we must give account.”

This is exactly how the word of God worked within Connor, as God has done with countless others.  And frankly, this is all that matters to him, and I believe he knows that.  Only Jesus could have rescued him from the despair he was going through.  Degrees and honors will come and go, and fade away. Friends and family may fail us sometimes, but God will not.  His word “is forever settled in heaven”, and that is what you can count on.  Connor understands that the most important thing on the day of graduation was his salvation, which comes through no other name than that of Jesus Christ.  His trust in God led to his successful fulfillment of a good education, and led him to the young lady who will soon be his wife.  Certainly this is only the beginning.

Part of the problem with many weak Christians today is that, because of political correctness and societal pressure, they are afraid to unequivocally declare that Jesus Christ is the only way to God. They want to get along with others and not offend anyone, and thus they compromise their witness by not speaking boldly. The question for each and every one is us if this: are you ready to not only say you are a Christian, but are you ready to be subjected to possible ridicule and persecution by standing for the truth of God’s word?  Just remember Luke 12:8-9.

To listen to Connor’s eight minute speech, go to youtube.com/watch?v=kwTp_xlpel8