Have You Prayed Today? – A Matter of Faith 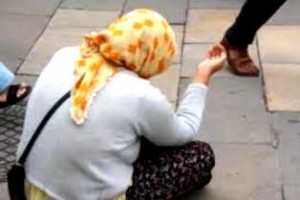 A woman begging on the street

“Ma’am,” she said again as she approached. “Can I get a cigarette from you?” She looked pitiful. She was walking with a limp and her hands were shaking.”Ma’am. Excuse me, ma’am.” I turned to seek the direction of the voice. Was someone addressing me? Since the woman behind the voice was the only other person on the sidewalk leading to the door of a local business, I stopped. From her attire, I decided she was probably looking for a handout. I was right, but it wasn’t the usual request.

“Sorry, but I don’t smoke,” I replied. I never have but I didn’t tell her that. As I turned to walk away, my first thought was one of judgment — why doesn’t she just quit that nasty habit? Before I had taken another step, I was convicted. When my father was alive, he smoked. He could never quit. I understand the addiction.

Immediately, I lifted the woman up in prayer, saying, “Lord, please deliver her from her nicotine addiction.”

That day was not the first time I’d been led to pray for a stranger. Many times I ‘ve passed a homeless person walking down the side of the highway or heard the wail of an ambulance or fire truck and lifted those involved, including the first responders, up in prayer.

When I become discouraged with my neighborhood homeowners who don’t take care of their property like I think they should, I pray as I am passing their house on my daily walk. Does it change the neighbor? No, but it changes my attitude.

Recently, my prayers have been for nonbelievers who contacted me via email concerning a column I wrote a few weeks ago entitled, “What would you tell an atheist?”. My simple prayer is, “Lord, reveal yourself to them in a powerful way and let them recognize that it’s you.”

Pastor and theologian Sidlow Baxter once said, “Men may spurn our appeals, reject our message, oppose our arguments, despise our persons, but they are helpless against our prayers.” 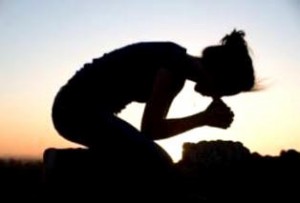 Silhouette of a Young Woman Praying

Søren Kierkegaard, a 19th century theologian, said “The function of prayer is not to influence God, but rather to change the nature of the one who prays.”A 2013 Pew Research survey revealed that for many Americans, every day is a day of prayer. According to their survey last year, more than half (55%) of Americans said they pray every day, while 23% said they pray weekly or monthly and 21% seldom or never pray. Even among those who are religiously unaffiliated, 21% said they pray daily. Another survey conducted in 2012 found that 76% of Americans agreed with the statement “prayer is an important part of my daily life,” a percentage that has remained relatively stable over the last 25 years.

Prayer is not complicated. It’s just a conversation with your Heavenly Father. It’s not about getting something from Him. It’s about spiritual growth. Have you prayed today?

Carol Round is a syndicated columnist, author, and speaker, who is available to speak at women’s events or to lead prayer journaling workshops. She has been writing her weekly column, A Matter of Faith, after retiring from a 30-year teaching career in 2005. Her five books include three collections of her columns: A Matter of Faith, Faith Matters and By FAITH Alone. In 2012, Westbow Press released her book, Journaling with Jesus: How to Draw Closer to God, with the companion workbook, The 40-Day Challenge. All of Carol’s books are available through www.Amazon.com or by contacting the author through www.carolaround.com.