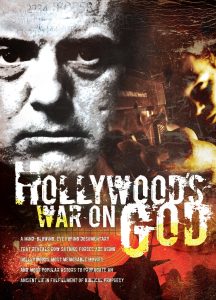 Hollywood’s War on God is a mind-blowing, eye-popping documentary that reveals how satanic forces are using Hollywood’s most memorable movies and most popular actors to propagate an ancient lie in fulfillment of biblical prophecy.

Learn how these movies are initiating the masses into a Gnostic worldview that will culminate in a “strong delusion” as the world joins Satan & the final Antichrist in their war on God.

This has to be one of the most important documentaries ever produced. You will never see anything like it on TV. It will change your view of Hollywood and TV forever.

Joe Schimmel, the producer, used to be heavily involved in the occult and has spent many years exposing various deceptions of Satan, especially in the fields of music and movies.

Hollywood’s War on God is available for streaming through Amazon or on DVD.