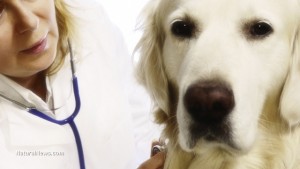 By Julie Wilson
(NaturalNews) The website of Dr. William Falconer, a homeopathic veterinarian based in the Texas Hill Country, has come under attack since he exposed the harmful (and sometimes deadly) side-effects of a widely prescribed drug used to control allergic and atopic dermatitis in dogs, a condition characterized by chronic itching that results in red, irritated and inflamed skin.

Dr. Falconer, a conventional vet turned holistic, has been reporting on the “damaging side-effects” of Apoquel, an anti-inflammatory drug made by Zoetis, a subsidiary of Pfizer. Released in 2014, the drug promises to alleviate itching in dogs within 4 hours, and “effectively” control the problem within 24 hours, with “minimal side-effects.”

Yet, the drug continues to sell like “hot cakes,” says Dr. Falconer, resulting in mass shortages.

Though it may quickly relieve itching (temporarily), Apoquel is not all it’s cracked up to be. In fact, it’s been linked to difficulty breathing, nose bleeds, weight gain, fever, papilloma lesions in the mouth, decreased appetite, abdominal pain and vomiting. Pet owners also report that the drug stops working after a while.

Dr. Falconer exposed the drug’s side-effects and its eventual ineffectiveness in an article entitled “Apoquel: Dog Miracle Drug With a Dark Side.” The story went viral, receiving 400 percent more traffic than other pages on his website, VitalAnimal.com.

The article was so popular that it showed up in the top search results on Google for “Apoquel,” ranking only second to Zoetis’ advertisements for the drug.

“Hi Will or support folks, I have been trying to read up on new things on your web site, and can not get in. It says it’s up and running, but won’t open. Just keeps saying to reload page and then error. Is there a problem that may be fixed soon?”

The emails kept pouring in, prompting Dr. Falconer to alert the support at his web hosting company, who replied, “We’ve identified an ongoing attack targeting your site.”

Because the attacks “paralleled” his viral post on Apoquel, Dr. Falconer finds it to be an unlikely coincidence.

The support staff assured him that the attacker is now blocked and the issue is resolved; however, his site keeps crashing, with no explanation as to why.

Is it possible that Big Pharma grew angry about the negative attention being cast on its lucrative drug Apoquel, and tasked operatives with disrupting the information? Absolutely, it’s possible. Remember, this is an industry that openly plots the death of those who stand in their way, as documented in court records.

Dr. Falconer concurs.  “As you might imagine, my post outlining the short-sighted design of this drug and growing reports of its serious side effects probably doesn’t set well with Big Pharma’s greedy goals. Keep the shareholders happy! Your animal’s health? Not so important, it would seem,” he wrote.

“When harm comes from tweaking your dog’s immune system with a drug, I think you need to know about it. Are you going to hear about it from Dr. WhiteCoat who sells Apoquel for dogs who itch too much? You can bet not.”

Allergies and chronic itching are the number one reasons pets see the vet, says Dr. Falconer, adding that the symptoms are the result of a confused immune system caused by over-vaccinating.

Vaccinating your pet annually is not only dangerous, but completely unnecessary, as most vaccines provide immunity for years or for the life of the animal, as stated by well-respected practitioners of conventional veterinary medicine.

A clear sign of immune confusion, as Dr. Falconer refers to it, is an overreacting immune system. “Immune systems are put into a state of confusion by vaccines whose sole purpose is to hype that very system.” Over-vaccinating often results in a number of chronic illnesses, including:

Pets with any of the above listed illnesses (or any others) absolutely should not be vaccinated. Click here to learn what exempts your pet from annual vaccination, and for a vaccine-opt-out template made by Dr. Falconer.

You can sign up for Dr. Falconer’s newsletter to learn more about homeopathy for pets here.